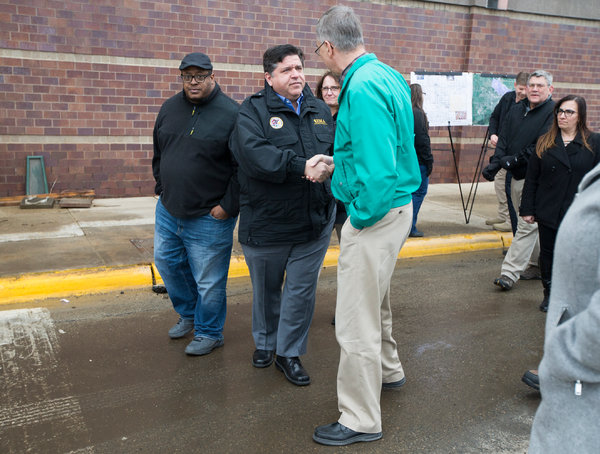 The news that Anna Sorokin, the New York “party girl grifter” whose story has fascinated society and Hollywood and who is on trial in Manhattan Supreme Court, has been advised by a stylist on what to wear for her courtroom appearances should not really come as a surprise to anyone.

Increasingly, it seems, there is a tendency to rely on experts to help navigate the thorny issues of what to wear when, and not just for highly fraught events.

Consider, for example, the recent reports that J.B. Pritzker, the governor of Illinois, has daily notations on his official schedule related to dress. Or rather, how to dress for different occasions. This has gotten less attention than Ms. Sorokin’s news has (he is, to be fair, a somewhat less sensationalist figure), but in many ways it is a similarly revealing sign of the times.

According to John O’Connor of The Associated Press, who used the Freedom of Information Act to get access to the governor’s schedule during the first six weeks of his term, there were more than 70 written recommendations regarding what the governor should wear to various planned events.

The advice included when to bring multiple tie choices (for his official photo; he went with marine blue with white polka dots), when to forget the tie altogether, as well as what occasions were best for the “polo with Columbia jacket.”

At first, like Mr. O’Connor, I thought this was unusual. Governor Pritzker, after all, has been a businessman and philanthropist, and presumably knows how to dress for the office. So I called Jordan Abudayyeh, Mr. Pritzker’s press secretary, to ask why it was necessary.

She said the notations were “standard operating procedure” meant to make his life simpler and make sure he always looked appropriate. She did not have much else to add.

Which is too bad, because Mr. Pritzker and his team are indeed far from alone in this particular strategy, though they may be taking it to a slightly more extreme level than most.

According to Ryan Williams, a Republican strategist and former aide to Mitt Romney during Mr. Romney’s time as governor of Massachusetts and his two presidential campaigns, it was “not unusual” to jot down on the governor’s schedule whether the dress code for an event was “business, casual or black tie.”

During the campaigns, this could be even more detailed, depending on the event. (A country barbecue, for example, might require more thought.)

Donna Brazile, the onetime interim head of the Democratic National Committee and a recently signed Fox News contributor, said that in her experience such advice came from communications and advance teams and was “part of the message of the day.” Also, that it had become increasingly important and, perhaps, detailed.

“Once upon a time, you had three dress codes: business, casual and formal,” she wrote in an email, noting that today candidates can dress to “signal everything from leadership style to their political branding” and hence need a certain amount of premeditation.

In that context, you can go one of two ways: adopt an effective uniform that communicates an attitude of formality in representing the job (see, for example, President Trump, who rarely appears in public without a jacket, and seems happiest in his oversize suits and below-the-belt red ties); or dress to fit in with the group you are with. In which case maybe you need a bit of help determining what that means.

There is nothing wrong with this, or with thinking about this; it doesn’t reveal a superficiality or lack of substance, which is often the default fear when the topic of clothing comes up.

On the contrary, it acknowledges the truth that we all make snap judgments based first on appearance, and then make a choice about how much time and brain space need to be devoted to influencing those judgments, and how much can be delegated.

This should be something everyone can relate to, given the current craziness around dress codes in general, be it the complete nonsense of events that request “creative dress” or “dress to impress” or the difficulty of corporate strictures on dressing “appropriately” in an office setting, a word so vague that it is practically meaningless. (Yes, Goldman Sachs, this means you.)

To a certain extent, we are always in search of dress recommendations and instruction, as the social and professional codes of yesteryear have eroded under the increasing commingling of life and work, putting an end to unspoken uniforms.

That’s why stylists and personal shoppers have become such a booming business, increasingly famous in their own right. In many ways, politics has been the most insulated of all professions, but clearly, even that is changing.

(And really, if there is such a thing as a courtroom stylist, can a political stylist be far behind? This is essentially the role Meredith Koop played for Michelle Obama, though officially her job was general aide, and how Hervé Pierre functions for Melania Trump.)

Mr. O’Connor of The Associated Press said that after he discovered the dress notations on Mr. Pritzker’s schedule, he asked to speak with the governor about the subject but to no avail (his email request received no response, which was, he said, a rarity in his experience). Frankly, I think Governor Pritzker missed a great opportunity. He would have done everyone a favor if, once the topic was on the table, he had embraced it.

Imagine how liberating it would be if a politician, especially a male one, was secure enough to give an interview about the importance of dressing the part, and how useful it was to have someone thinking about that so he could use his time crafting policy, be it for flood management or health care?

Especially because the question of public figures and what they wear and who helps decide that is bound to become more fraught during the coming Democratic primary, as the pressure to distinguish oneself will put more onus on crafting an identifiable image that stands apart while simultaneously standing for something.

Arguably Beto O’Rourke has already proven himself to be working this angle, at least judging by his Vanity Fair cover and his skill at casting himself as the people’s pol.

Though given that he hired a campaign manager only last week, chances are he is still styling himself.

Vanessa Friedman is The Times’s fashion director and chief fashion critic. She was previously the fashion editor of the Financial Times. @VVFriedman