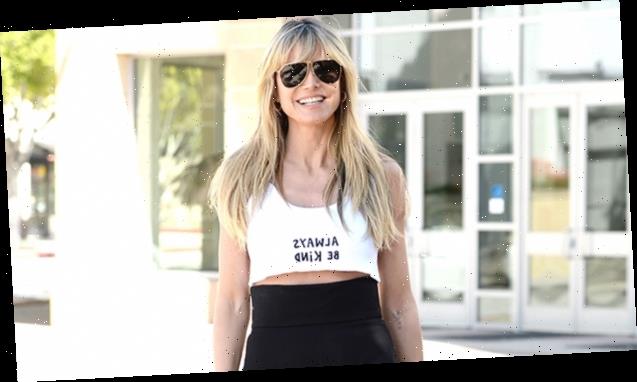 Heidi Klum looked super cute and confident on her way to the season 16 set of ‘America’s Got Talent.’ See her fun, flirty, and casual look!

Heidi Klum started her day on the set of America’s Got Talent with an important message written across her crop top! The stunning model and judge of the reality competition series, 47, was photographed on her way to film AGT on March 31 rocking a pair of black, super high-waisted pants and a tiny white crop top with the words “always be kind” written in black on the fabric.

Heidi completed her look with a pair of pointed toe white pumps and wore a pair of aviator sunglasses to keep the glowing sun out of her eyes. While stopping to pose for photos before entering the studio, Heidi also showed off her gorgeous red bag that totally added a pop of color to her ensemble. Heidi smiled as photos were snapped and proudly showed of her new haircut, featuring fun fringe!

It looks like Heidi has been having so much fun on the set of AGT, now that she, co-judges Howie Mandel, Sofia Vergara, Simon Cowell, and host Terry Crews are finally reunited! Heidi has even taken to her own Instagram account to give fans a behind-the-scenes look at all of the fun she is having. The same day that Heidi was snapped sporting her cute little crop top, she also shared a fun boomerang video on Instagram, which you can see above.

In the clip, Heidi showed off her dance moves and did an epic body roll in an all-black, fitted suit. Howie gave a thumbs up while pointing to his two gorgeous co-judges, and Sofia absolutely sizzled in a fitted red dress with silver detailing. The trio looked absolutely thrilled to be back on set, and fans are surely looking forward to everything that they have in store.

AGT is nearly done with it’s very first week of filming for its landmark 16th season! Simon Cowell is officially back behind the desk and ready to judge a slew of talented new contestants for the upcoming season. By the looks of it, Heidi and the gang are energized and ready to “be kind” in their judgements for the new batch of episodes.