The crushed boyfriend took to Reddit to ask if he overreacted when he dumped his partner after she changed her answer. But in a bizarre twist – people have said he was in the wrong.

The man explained that the couple were enjoying a cruise when he decided to get down on one knee in a very public place.

He said: “I set it up at the end of a show – with a photographer and everything – and popped the question and she said yes!

"I was so elated, on cloud nine, it was like a dream. 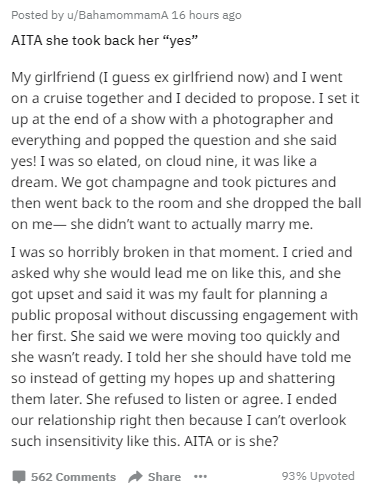 “We got champagne and took pictures and then went back to the room and she dropped the ball on me – she didn’t want to actually marry me.”

He claims he was so “horribly broken” he ended things there and then with his short-lived fiancé.

The jilted lover continued: “I cried and asked why she would lead me on like this, and she got upset and said it was my fault for planning a public proposal without discussing engagement with her first.

“She said we were moving too quickly and she wasn’t ready.

“I told her she should have told me instead of getting my hopes up and shattering them later.

“She refused to listen or agree. I ended our relationship right then because I can’t overlook such insensitivity like this.”

His post has racked up hundreds of comments – but most people have sided with his girlfriend. One person pointed out: “OP [original poster] did this on a cruise.

“There’s no real way out for her here; they’re literally trapped in the same place for an unspecified period of time after the proposal.”

“Really, you shouldn't propose to someone at all without talking about it first.

“Would you have felt better if she said no in front of everyone?”

Agreeing, this person even praised his now ex-girlfriend.

They said: “She covered for OPs massive mistake by feigning yes and brought it up in private.

“Sounds like she really cared for OP to fake a yes to spare a scene in public.

“It’s too bad OP broke it off with her.”

After the proposal there's wedding planning, and one bride revealed her dilemma after her future mother-in-law suggested uninviting her dad because he’s disabled.

The guest list was named as the top stress for brides and grooms after the top 10 arguments over wedding planning were revealed.

And if you do decide to vent about wedding stress, beware you might end up on a Facebook Wedding Shaming group.