Once upon a time, slippers were reserved for the hours spent indoors before and after work. But for the masses working from home this year, dress codes have been transformed — business casual, who? — including footwear. Farewell, heels; hello, fuzzy slides.

Cloudlike open-toed shoes have become a cozy quarantine staple. “They kind of cover all those grounds and are good for wearing in the house, but also you can run out in them and be fine,” said Beth Goldstein, executive director and industry analyst for fashion, footwear and accessories for the NPD Group. (They may also save you a trip to the podiatrist.)

The fuzzy-slide trend has been percolating since at least 2016, when Rihanna released a Fenty x Puma sandal with a faux-fur strap. This year’s standout has been Fluff Yeah: slippers from the Australian footwear company Ugg that have been spotted on several celebrities, including Selena Gomez, Kylie Jenner and Bella Hadid.

According to Ms. Goldstein, slippers saw a 50 percent increase in sales from March to November of this year compared with 2019, while sales of mules and clogs went up by 25 percent in the same period.

Many of the year’s popular slides have crisscrossing straps, like those on EMU’s Mayberry.

EMU Australia’s slipper business increased significantly, said Keith Barnett, the president of EMU North America, thanks largely to sales of the Mayberry. “Wearing slippers outside is becoming the new norm,” he said. “And I think it’s here to stay.” 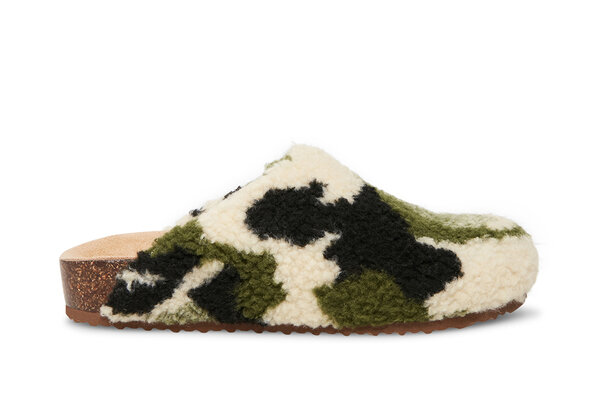 Steve Madden also experienced an uptick in demand for its slippers, which accounted for 9 percent of the company’s sales this year compared to just 1 percent a year ago, said Karla Frieders, the chief merchandising officer at Steve Madden.

Styles that feature materials like faux fur and shearling, have been especially popular, Ms. Frieders wrote in an email. “These were not typical slippers because we designed them on soles for outdoor use as well,” she said.

Likewise, Crocs have sold well during the pandemic. Heidi Cooley, the head of global marketing at the company, said that revenue for the third quarter of 2020 grew in wholesale, retail and e-commerce. The brand earned cred for collaborating with Bad Bunny and Justin Bieber and for donating 860,000 pairs of Crocs to frontline health care workers. But mostly, it was a shoe that reflected the moment: unfussy, utilitarian and unusual.

“What we’re experiencing now is a casualization of the marketplace, which, combined with the growing shift toward comfort, allows us to meet consumers where they want to be,” Ms. Cooley wrote in an email. “This means delivering on comfort, but also on simplicity, versatility, self-expression and value — all things we do very well as a brand.”

Casual footwear has long revolved around the psychology of relaxation. “When you think about putting on slippers or slipper socks, it always meant it was time to relax,” Ellen Lynch, a professor in the accessories design department at F.I.T., said in a phone interview. “You didn’t have to dress for work. You could really enjoy yourself.”

In 1980, when the transit strike halted subway and bus service in New York City, people began to merge work wear with comfortable shoes that would allow them to walk miles to the office, where they would then change into their dress shoes.

When Crocs was founded, in 2002, ideas about indoor shoes versus outdoor were starting to shift. “When they first began, they were really referred to as the ‘Sunday Times shoe’ because people felt comfortable enough on a Sunday to go out in Manhattan, grab a cup of coffee and The New York Times, and they didn’t have to worry about changing their shoes,” Ms. Lynch said.

Faux-fur footwear was popular in earlier decades, like the 1950s, but it was largely confined to dress shoes and mules. It wasn’t until recently, Ms. Lynch said, that fuzzy slippers “reinterpreted themselves into a more comfortable, durable, but not work-related kind of shoe.”

These days, with work wear loosely defined and return-to-office dates up in the air, who knows? Fuzzy slippers could be here to stay.