Florence Knoll Bassett, a pioneering designer and entrepreneur who created the modern look and feel of America’s postwar corporate office with sleek furniture, artistic textiles and an uncluttered, free-flowing workplace environment, died on Friday in Coral Cables, Fla. She was 101.

Her death was announced by David E. Bright, a spokesman for Knoll Inc., the company she and her husband Hans Knoll ran for many years.

To connoisseurs of Modernism, the mid-20th-century designs of Florence Knoll, as she was known, were — and still are — the essence of the genre’s clean, functional forms. Transcending design fads, they are still influential, still contemporary, still common in offices, homes and public spaces, still found in dealers’ showrooms and represented in museum collections.

Ms. Knoll learned her art at the side of Modernist masters. She was a protégé of the German-American architect Ludwig Mies van der Rohe and Eliel Saarinen, the Finnish architect and teacher and the father of the architect Eero Saarinen. And she worked with the renowned Bauhaus architects Walter Gropius and Marcel Breuer. Throughout her career, influenced by the German Bauhaus school of design, she promoted the Modernist merger of architecture, art and utility in her furnishings and interiors, especially — although not exclusively — for offices.

In the 1940s, she married and became a business partner of the German-born furniture maker Hans Knoll, and over 20 years she was instrumental in building Knoll Associates into the largest and most prestigious high-end design firm of its kind, with 35 showrooms in the United States and around the world. 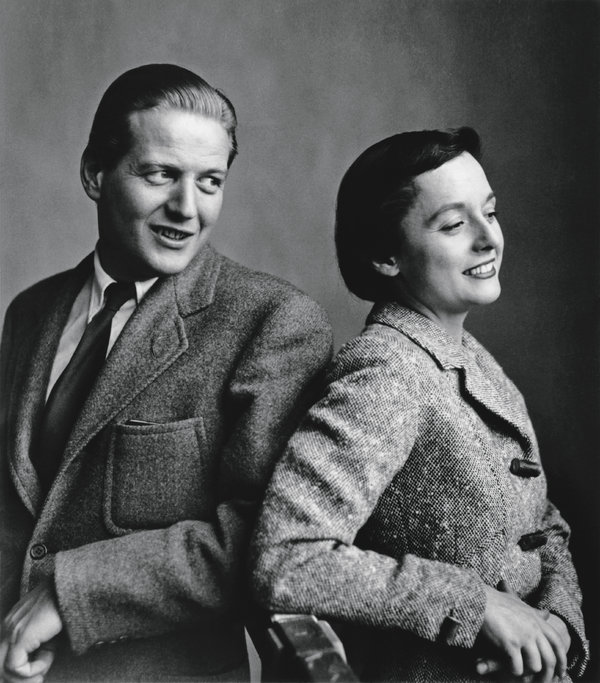 While her husband handled business affairs, Ms. Knoll was the design force of Knoll Associates. It grew to become the leading innovator of modern interiors and furnishings in the 1950s and ’60s, transforming the CBS, Seagram and Look magazine headquarters in Manhattan, the H. J. Heinz headquarters in Pittsburgh and properties across the United States, Europe, Asia and South America, including American embassies.

Besides doing strategic planning and designing furniture herself, Ms. Knoll recruited and hired many of the world’s best postwar designers. She staked the sculptor Harry Bertoia to two years in a studio barn to see if, working with metals, he could turn out furniture. His wire chairs became Knoll classics. She asked Eero Saarinen to design a chair “like a great big basket of pillows that I can curl up in.” He created the body-embracing “womb chair.”

She also brought designer friends and former teachers into the fold by acquiring rights to their creations, paying them commissions and royalties, and giving them credit for their designs.

Some of the 20th century’s most admired designs thus became Knoll replicas, including Isamu Noguchi’s cyclone table (1950), held up by a whorl of rods like a tornado funnel, and the Barcelona chair, the sloped leather-and-steel piece created by Mies van der Rohe and Lilly Reich for the 1929 International Exposition in Barcelona, Spain.

Even replicas of such designs were expensive to produce, involving some hand-crafting, and retail prices ran into the thousands despite Ms. Knoll’s cost controls. The frame of the Barcelona chair, for example, originally nine steel components bolted together, was designed as a seamless piece of stainless steel, and cowhide instead of pigskin was used for seat and back coverings.

“Her exactitude could be frustrating for those who worked under her,” the website LiveAuctioneers .com said of her in a profile.

But the fruit of that labor became universally known. “Every time you see Barcelona chairs and a table in a lobby, that’s her,” Kathryn Hiesinger, a curator at the Philadelphia Museum of Art, told The New York Times in 2004, when Ms. Knoll came out of retirement to create the museum’s exhibition “Florence Knoll Bassett: Defining Modern.”

Besides the Philadelphia museum, her work is in the collections of the Museum of Modern Art and the Metropolitan Museum of Art in New York and the Musée des Arts Décoratifs in Paris.

Some of her work is currently on display at Gracie Mansion, the residence of New York City’s mayor, as part of a yearlong exhibition titled “She Persists: A Century of Women Artists in New York,” spearheaded by the city’s first lady, Chirlane McCray.

To market their merchandise, the Knolls established showrooms in Chicago, San Francisco, Los Angeles, Dallas and other American cities, as well as in Europe, Asia and South America. They kept their New York showroom, but moved the base of operations in 1950 to East Greenville, Pa., northwest of Philadelphia.

After Mr. Knoll died in a car accident in 1955, Ms. Knoll succeeded him as president and held that post until 1960. Although she sold her interest in the company, she remained as its design director until 1965, when she retired to a private practice in architecture and design in Florida. In her last decade at Knoll, the company doubled in size and became one of the nation’s most influential design organizations.

In 1984, Paul Goldberger, then the architecture critic of The Times, wrote that Ms. Knoll “probably did more than any other single figure to create the modern, sleek, postwar American office, introducing contemporary furniture and a sense of open planning into the work environment.”

Florence Marguerite Schust was born in Saginaw, Mich., on May 24, 1917, to Frederick and Mina (Haisting) Schust. Her father, an engineer and the president of a baking company, died when she was 5, her mother when she was 12. A precocious child fascinated with architecture, Florence was virtually adopted in the 1930s by Eliel Saarinen and his wife, Loja.

She attended Kingswood, a girls’ school in Bloomfield Hills, Mich., and later its affiliate in the same city, the Cranbrook Academy of Art, a fountainhead of architecture and design. Both were residential schools for practicing artists, overseen by Eliel Saarinen. His son, Eero, also a Cranbrook student, went on to design the CBS headquarters in New York and the winged TWA Flight Center at Kennedy International Airport.

Florence Schust spent summers with the Saarinens in Europe, exposed to a world of art and culture. After two years at the Architectural Association in London, she returned to the United States as World War II began. She was an apprentice for a year at Gropius & Breuer in Boston, studied at Columbia University’s School of Architecture and under Mies van der Rohe, and earned a bachelor’s degree in architecture from the Armour Institute of Technology (now the Illinois Institute of Technology) in Chicago in 1941.

She went to work for Wallace K. Harrison, the architect who helped design Rockefeller Center, the United Nations and Lincoln Center.

In 1943, she became a designer for Mr. Knoll, the scion of a family that had founded a furniture business in Germany in 1865, who had established his own furniture business in New York in 1938. They were married in 1946, and she became his partner in Knoll Associates. With her connections to architects and designers, the company expanded rapidly with its modernist collections.

After her retirement, she accepted some private clients but refused almost all interviews and public appearances.

She is survived by two stepsons, Harry Jr. and Patrick Bassett; a stepdaughter, Maia Marcq, whose father was Hans Knoll; and nine grandchildren. A third stepson, George Bassett, died in 2008.

Ms. Knoll Bassett donated her papers to the Smithsonian Institution in 2000. In 1961, she became the first woman to receive the Gold Medal for Industrial Design from the American Institute of Architects, and in 1983 she won the Athena Award of the Rhode Island School of Design.

In 2003, President George W. Bush presented her with the nation’s highest award for artistic excellence, the National Medal of Arts.

“I’ve had an extraordinary life when you think about it,” she told Metropolis magazine in 2001. “Growing up at Cranbrook, living as part of the Saarinen family. … ”

An earlier version of the headline with this obituary misstated Ms. Knoll Bassett’s given name as Frances.