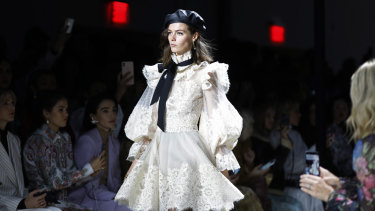 A model wears a design in the Zimmermann show at New York Fashion Week.Credit:AP

Designer Nicky Zimmermann said in the show notes she had been thinking about Wake, who grew up in Australia, when she imagined the fall collection.

"For me the work of a spy evoked a mood of subterfuge and sabotage," Zimmermann said. "And this story really set off my imagination – a mysterious and brave woman, a chameleon who moves around in secrecy, strong and resilient, always so evasive so as never to be caught. I loved the idea of such a feminine, skilful and selfless figure – a woman who helped people in the most difficult of circumstances." 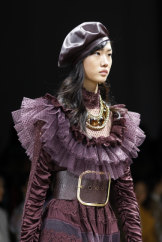 This vision translated into leather trench coats (a look repeated on several catwalks, so invest in one for this season and next), anoraks and bomber jackets in a palette of sand, clay and mahogany.

Other nods to the resistance movement came in the form of leather berets and belts with pouches. But the looks still had the Zimmermann signature, finished in delicate lace and mesh, as well as some floral maxi-dresses that will prove popular with Australian clientele looking for the perfect transeasonal piece for their wardrobe (the collection will be on sale in about six months).

Zimmermann said there was a juxtaposition between the "sophisticated and romantic … balanced by a modern interpretation of corsetry – this is a woman who knows the power of her femininity and how to transform it on a whim".

Barely 24 hours earlier, Dion Lee also used corsetry as inspiration for his collection, which Vogue described as a "return to form". 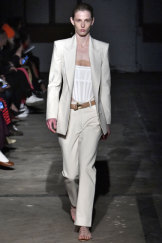 Lee said, despite taking his cues from one of the most restrictive garments in history, this collection felt "quite easy and a little softer than some of [his] previous collections".

The Sydney-born designer said he hadn't intended on making a statement by sending a white suit down the runway as the first look, despite the colour certainly enjoying attention of late.

Last week, Democrat women all wore white to Donald Trump's State of the Union address as a show of solidarity with the feminist movement.

Lee said the suit in question was made from soft denim and a corset, as opposed to "traditional" suiting fabrics.

"Even though it’s a suit – it’s a symbol of strength and power but [I dealt] with it in an everyday sense," he said.