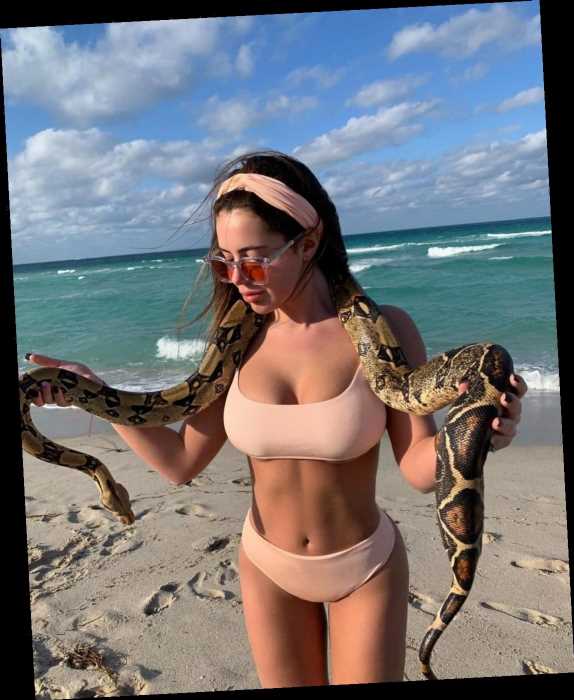 On Tuesday, Kim Zolciak-Biermann shared two photos of her 23-year-old daughter posing on the beach in a pale pink bikini and a matching headband (both from Zolciak-Biermann's swimwear line, Salty K) while holding a snake à la Britney Spears at the 2001 MTV Video Music Awards.

"My beautiful @briellebiermann wearing @saltykswim"SeaShells" in color Lychee with matching headband 🔥🔥 (comes in a thong or cheeky bottom) don't know what the hell possessed her to hold a 🐍 😫🙈" the Real Housewives of Atlanta alum, 42, captioned her post.

"She can even charm a snake in that suit❤️❤️❤️❤️❤️😘😘" the Zolciak-Biermann family's private chef, Tracey Bloom, joked. "Omg i want this suit," Brielle's hairstylist Chrissy Rasmussen wrote, adding, "And she is so GORG 💕" And this is not the first time the Don't Be Tardy reality star has modeled her mom's swimwear line on social media. In July, Biermann helped promote the luxury sustainable brand during a beach day with some friends.

The star showed off the Salty K Seasalt Top and Bottoms (which retail for $90 each) while showing plenty of skin in the skimpy baby blue Brazilian bikini thong bottoms. As one friend took her photo, another one filmed from a different angle and zoomed in close on her bottom in a video shared on her Instagram Story.

The reality star jokingly captioned the clip, "We'll do anything for the best shot!"

Another video captured Biermann seductively straddling in the water with her backside turned to the camera and her face leaning to look over her right shoulder.

Biermann also supported her mom's swimwear designs before the launch earlier this year. In May, she shared snaps from a backyard photo shoot, sharing one close-up selfie and one half-body outfit shot, with the caption, "POV the bartender bringing me my drink poolside🍹."

When Zolciak-Biermann launched Salty K, she told PEOPLE that designing swimwear was always a dream of hers, since's always had so many different design ideas.

"I know how I want suits to look and fit. I have visions and sketches," the star said.