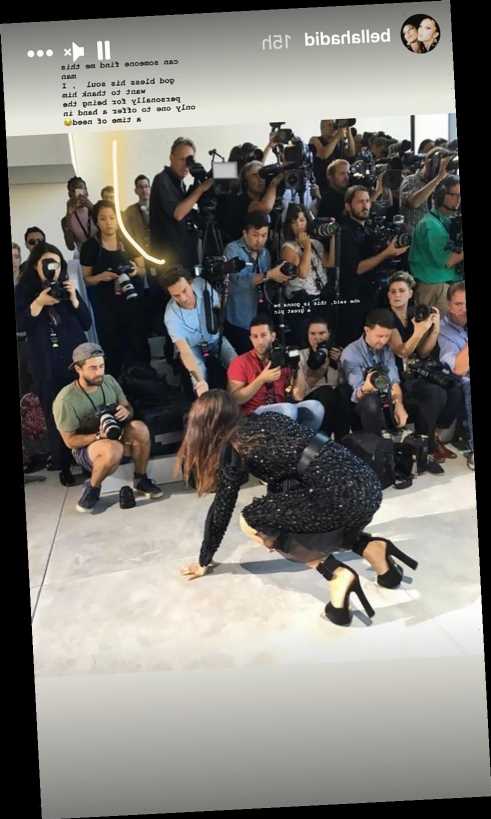 Bella Hadid is reminiscing on New York Fashion Week's past, as designers roll out their fall/winter 2021 collections virtually amid the coronavirus pandemic.

On Thursday, the 24-year-old supermodel posted a throwback photo of her viral fall during Michael Kors' Spring 2017 runway show.

As fans will remember, Hadid was modeling a fully embellished knee-length dress with ruffled hems when her towering platform heels got the best of her while rounding the corner toward the photographers' pit. The seasoned pro handled it gracefully, hoisting herself up and continuing her walk down the runway. Now, four years later, she's taking a closer look at the tumble — and how the photographers who witnessed it reacted.

"Can someone find me this man? God bless his soul," she wrote on her Instagram Story, alongside an arrow pointing to a photographer who leaped up to help Hadid. "I want to thank him personally for being the only one to offer a hand in a time of need."

She also posted a close-up of the same photo, this time adding a crown emoji over the man's head.

The supermodel went on to lightheartedly call out another photographer who looked eager to capture the headline-worthy moment on camera. "She said, this is gonna be a great pic," Hadid wrote.

She had a good sense of humor about the accident in 2016 as well. At the time, Hadid briefly mentioned her fall in an Instagram post thanking the designer for having her in the show.

"Michael Kors today❤️ Thank you so much for having me in the show @michaelkors@johndavidpfeiffer ❤️💋💐 (seconds before 😅🙈)," she captioned a video of her pass down the runway.

She also gave a shoutout to Hailey Baldwin who praised her poise after the tumble.

Some other famous faces that graced the runway included a slew of Victoria's Secret models. Joan Smalls opened the show with Kendall Jenner following right behind her, while Romee Strijd and Taylor Hill made appearances too.

She didn't appear fazed in the slightest, but if Bella is harboring any residual embarrassment from her fall, she can always turn to big sister Gigi for advice. Her supermodel sis experienced a major wardrobe malfunction on the Versace runway — and shook it off with a smile and a high-five from Donatella herself.