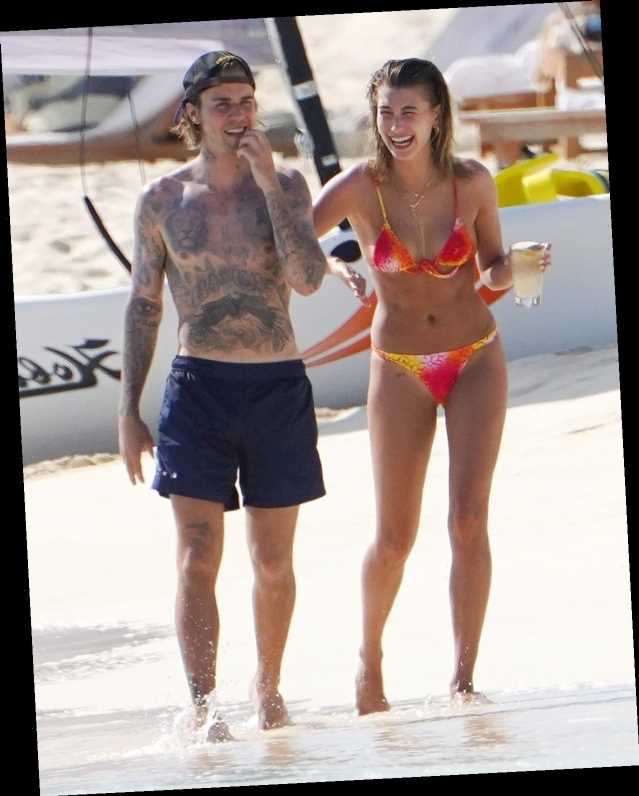 Justin Bieber and Hailey Baldwin are taking some time to relax, following the release of his sixth studio album Justice last week.

Over the weekend, the cute couple were photographed walking on the beach in Turks and Caicos. Bieber, 27, put his chest tattoos on display in navy swim trunks and a baseball cap, while his model wife, 24, sported a multi-color floral bikini and layered gold necklaces.

After returning from their weekend getaway, the budding street style icons were spotted outside of Nobu Malibu on Tuesday in comfy athleisure looks. The singer wore grey Fear of God Essentials sweatpants and a Drew House tie-dye hoodie, while the model paired a STAYCOOLNYC Deco Fleece sweatshirt with pink biker shorts and black sunglasses.

The outing comes after Bieber dropped his sixth studio album, Justice, alongside a music video for the track "Peaches" off of the new LP.

Including previously released singles "Anyone," "Holy" with Chance the Rapper, "Lonely" with Benny Blanco and "Hold On," the new album also features 12 other tracks from the "Love Yourself" crooner, like collaborations with artists such as The Kid LAROI, Dominic Fike, Khalid, Beam and Burna Boy.

Justice comes just a little over a year after Bieber dropped his album Changes in early 2020.

Back in February, Bieber shared the cover art for Justice and spoke about the album title in a reflective Instagram post.

"In a time when there's so much wrong with this broken planet we all crave healing and justice for humanity," he began. "In creating this album my goal is to make music that will provide comfort, to make songs that people can relate to and connect to so they feel less alone."

"Suffering, injustice and pain can leave people feeling helpless. Music is a great way of reminding each other that we aren't alone. Music can be a way to relate to one another and connect with one another," Bieber continued, before adding that this is his "small part" in helping to make the world a better place.

"I know that I cannot simply solve injustice by making music but I do know that if we all do our part by using our gifts to serve this planet and each other that we are that much closer to being united," he added. "This is me doing a small part. My part. I want to continue the conversation of what justice looks like so we can continue to heal."

Alongside the release of Justice on Friday, Bieber also dropped the music video for his latest single, "Peaches," a collaboration with GIVEŌN and Daniel Caesar.

Bieber previously performed the track during a recent appearance on NPR's Tiny Desk Concert on Wednesday.

Marking his first time appearing on the Tiny Desk special, the performance was a more stripped-down set compared to the recorded version.