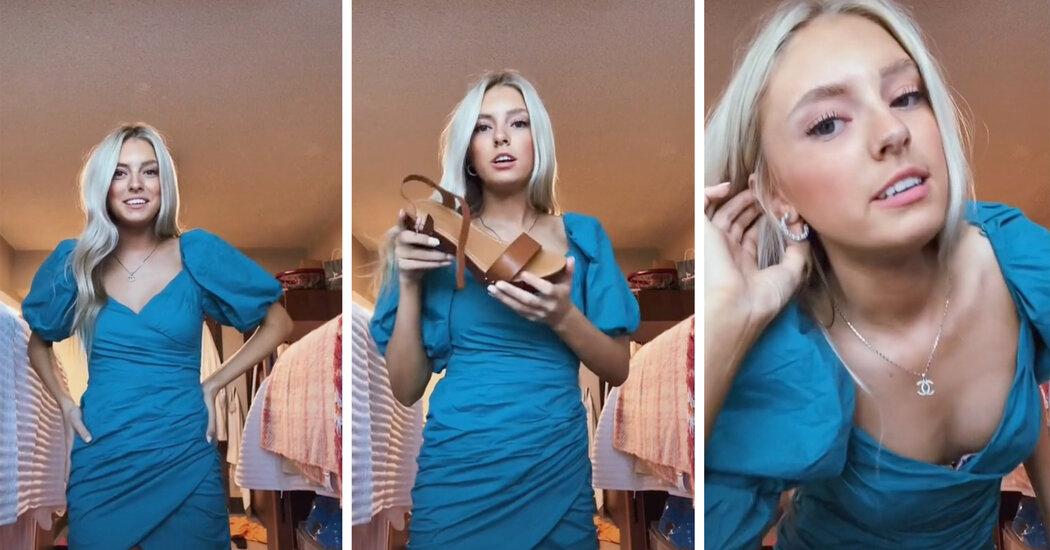 Her shoes? Steve Madden. Earrings? Kendra Scott. Her bracelets are from Shein; her purse, Target. Oh, and her necklace is “normal.” It’s Pref Night.

If this combination of words means anything to you, you have probably been watching sorority rush videos on TikTok. If not, that’s OK — there’s still time to figure out the rhythms and codes of RushTok, one of the platform’s latest viral hits.

The trend burst through last week during sorority rush at the University of Alabama in Tuscaloosa, but it continues today in the form of parody videos, deep dives on the status of various recruits and rush videos from women at other colleges across the country who are just starting the process themselves.

For those just catching up, here’s what you need — or better yet, may want — to know.

OK, you got me. What is sorority rush, and why are there so many outfits for it?

“Rush” is the informal name for the recruitment process of Greek organizations on college campuses. In the case of RushTok, most users are talking about the specific experience of rushing the traditionally white sororities that are part of the National Panhellenic Conference.

At the University of Alabama, this tightly choreographed series of events commences about a week before school begins: Freshmen women move into their dorms early in the hopes of securing a “bid” from one of the university’s 17 sorority chapters.

The rush process at Alabama consists of four main rounds of events: an Open House, where potential new members (PNMs) get to know all the different sororities; Philanthropy Day, where PNMs learn about — but do not actually participate in — each chapter’s volunteer work; a Sisterhood round, where PNMs spend carefully monitored one-on-one time with different sorority members; and Pref Night, where PNMs visit their favorite two houses.

It all culminated for Alabama PNMs and sorority members last Sunday in Bid Day — when PNMs officially accept bids to join a sorority. According to AL.com, 2,501 women attended Open House events this year, and 2,307 of them ended up with a bid at the end (that’s a 92 percent success rate).

Each round of recruitment has a specific dress code, and so PNMs show up to campus with suitcases full of potential outfits. (Alabama’s Panhellenic website offers suggestions: For Pref Night, for example, PNMs are advised to wear a dress fit for “a graduation ceremony or a daytime wedding.”)

Many freshmen documented the whole experience on TikTok in the form of “OOTD” videos, which have garnered millions of views on the platform.

That’s “outfit of the day.” Panhellenic organizations discourage freshmen from sharing specifics on social media about their recruitment experience (including what houses they like best, or which girls they dislike) but showing off outfits for rush is just fine.

Thus, the Bama Rush OOTD trend was born. The videos are uniform and mesmerizing: The women, most of whom have southern accents, simply explain what day it is and what brands they are wearing from earrings to shoes.

And then there are the elements of an outfit that are not so easily tagged by brands: shoes borrowed from a roommate, T-shirts gifted during the rush process and “normal,” or everyday, jewelry. (Maybe you got it from your mom, maybe you got it from Nordstrom.)

Why are these videos so popular? People seem really invested in the outfits and lives of these college students they don’t even know.

Many users report that they first saw Bama Rush videos on their “For You” page, which is curated by TikTok’s mysterious algorithm. There’s no way to tell for sure why this kind of video took off on the platform, but the stars of Bama Rush do resemble other big TikTok personalities: They’re mostly white, thin women showing off their outfits.

As for why people are so invested, well, even the stars of RushTok aren’t sure. In a video posted on Pref Night, a freshman at Auburn University named Blake Wright who has been using the #BamaRush hashtag addressed her growing TikTok following this way: “Thank y’all for being so invested and so sweet this entire week. Honestly, if this was on my ‘For You’ page I would have to like, keep scrolling, ‘cause this is just too much for me. But hey, if y’all like watching it I’m not complaining.”

According to a video she posted on Bid Day, Ms. Wright accepted a bid from Pi Beta Phi.

So, what does it take to get into one of these sororities?

It depends whom you ask. On its website, the university’s Panhellenic organization describes itself as “the nation’s largest and most diverse Greek community.” But it did not formally desegregate until 2013, after the student newspaper reported that Black freshmen were still being denied bids during that year’s recruitment process. Since then, diversity among the chapters has increased, though not by much.

Another barrier to sorority membership at Bama (and many, many other schools) is cost: Just signing up for rush requires a $350 fee, and member dues can run up to $4,978 a semester. That doesn’t include expenses like living in a sorority house (on average $7,465.17 a semester, according to the Alabama Panhellenic Association), new dresses for date parties, flights to the Caribbean for spring break and an endless stream of $25 T-shirts to commemorate social events.

So joining a sorority is expensive. Are the stars of RushTok making any money from their videos?

Some have certainly earned enough followers to start booking sponsorship deals if they wanted to. But the brands have been quicker to cash in. The jewelry brand Kendra Scott, which has been name-checked in too many RushTok videos to count, has capitalized on attention by posting its own semi-viral TikToks. The brand has since reported an increase in web traffic from new users in the coveted 18-to-24 demographic.

Good for Kendra Scott. Now that Bama Rush is over, will I ever have to think about this again?

Bama Rush may be over, but Ole Miss Rush is just getting started.