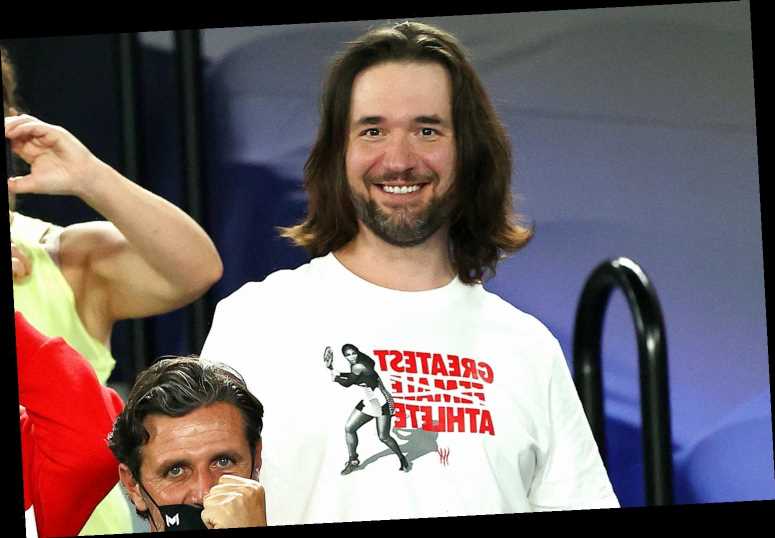 Alexis Ohanian has never held back when it comes to defending wife Serena Williams, and his latest show of support involves a powerful statement tee.

The Reddit co-founder, 37, arrived at the Australian Open semifinals match on Tuesday wearing a white t-shirt embossed with a photo of the tennis star, 39, and the words "GREATEST ATHLETE." The crossed-out word is seemingly a dig at critics who continue to downplay Williams' achievements — especially in comparison to male athletes who are less dominate in their sport.

Ohanian, who accessorized with a blue tie-dye face mask, tweeted a photo of himself in the crowd alongside a simple kissy face emoji.

"Yess represent your wife!!!!!" one person responded. A second wrote, "you better let them know," with a punching emoji.

On Feb. 4, Nike unveiled a pullover version of the same graphic on Instagram with the caption, "Being a champion isn't just about lifting trophies. It's about making history time and again."

"Celebrate some of @serenawilliams' greatest moments in her career — so far — with the Serena Iconic Tee Pack," the post continued. "Shop Now. Link in Bio."

Williams defeated No. 2 seed Simona Halep on Tuesday and will face Naomi Osaka in the finals Melbourne, Australia.

On the first day of the tournament, the tennis star won her match, beating Germany's Laura Siegemund 6-1, 6-1.

Her outfit also packed a meaningful sartorial punch. The tennis champion wore a color-block, asymmetric, one-legged Nike catsuit, which was worn as a tribute to the late great track star Florence Griffith Joyner. "I was inspired by Flo-Jo, who was a wonderful track athlete, amazing athlete when I was growing up," Williams said after the match, according to ESPN. "Watching her fashion, just always changing, her outfits were always amazing."

Though first-round matches at Grand Slams rarely pose any threat for Williams, as Yahoo! Sports reported, the renowned athlete was worried that a shoulder injury would affect her gameplay.

"I was happy just to get through it," she told reporters, per the outlet. "Wasn't sure how my serve would be after a little bit of that shoulder, but it's feeling good, I'm feeling good. So it felt really good."

And, as Williams also noted during a post-game interview, getting to play amid the ongoing COVID-19 pandemic and after a tumultuous year means a lot to her.

"Listen, this is amazing," she said of competing. "Last year was very crazy for the world and to be able to do what I love and to be able to come out and compete and play the Grand Slam after the last 12 months, it makes me appreciate the moment even more."