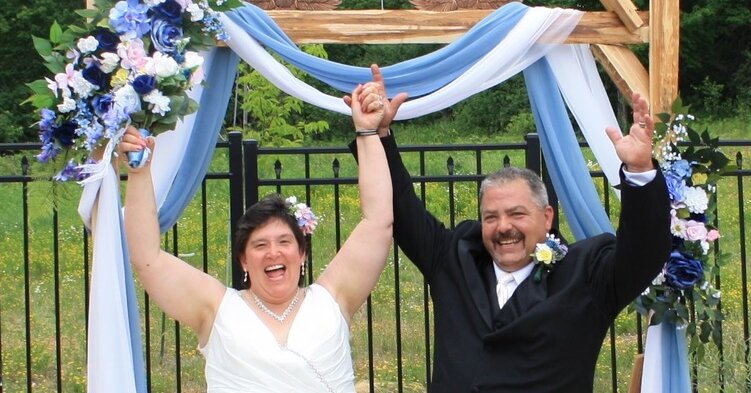 John Zey was 50 years old when he asked Avis Ranney permission to date her 46-year-old daughter, Kris Ranney, in September 2018. Though the question was a formality, he wasn’t sure the answer would be yes.

Mr. Zey’s interactions with Avis Ranney had become unpredictable. “She started having memory issues a year or two before then,” Mr. Zey said. By the time he sat Ms. Ranney down in her farmhouse in Menomonie, Wis., and asked to date Kris, her days of living independently were numbered; in October of that year, she moved to Azura Memory Care Center in Eau Claire, Wis. Mr. Zey got her blessing for a date before she left the 300-acre dairy farm that had been in her family’s care since 1867. But by then Kris Ranney had already decided that she wanted to spend the rest of her life with Mr. Zey.

Mr. Zey, now 53, and Ms. Ranney, now 49, had been previously married. They met in 2010 as workers at the food company Conagra Brands, where both were equipment operators. Until 2016, their relationship was friendly. “There was a little flirting here and there,” he said. And then, in 2017, Mr. Zey offered to help out on the farm. Ms. Ranney had recently moved back into her childhood bedroom to help manage her mother’s health and the property; her father, Edgar Ranney, died in 1998. “She has diabetes, and she had gotten to the point where she couldn’t figure out how much insulin to take and how to prepare her meals,” she said.

Mr. Zey, who grew up on a farm, cut the grass and kept the farm buildings in good repair. As the health of Ms. Ranney’s mother deteriorated, he pitched in more. Ms. Ranney fell in love. “I just thought, this man is willing to make changes in his own life to be there for me and my mother,” she said. By the time her mother, who is 83, moved to the memory care center, they considered themselves a couple, though they never found time for a first date.

“When you’re in that situation, with a farm and a major change in your family, you don’t really have time for recreation,” Ms. Ranney said. But Mr. Zey hadn’t run out of ways to show Ms. Ranney he cared. In March 2019, he accepted a job at Azura as head of maintenance; Ms. Ranney still works at Conagra Brands, now as a crew leader. Like the rest of the world, they didn’t know a pandemic was coming in 2020. But when it did, Mr. Zey’s presence at the care center was a comfort.

“I had been going every day to see Mom, and then Covid came and I wasn’t allowed to visit,” Ms. Ranney said. “It was terrifying. John was able to look in on her and make sure she was eating the right foods for her diabetes. And with him there, she didn’t feel alone.”

On Thanksgiving, Mr. Zey proposed. “I was a little shocked,” Ms. Ranney said. But she said yes. On June 17, exactly 60 years after her parents were married, Ms. Ranney and Mr. Zey were wed at Azura. Avis Ranney’s presence was only part of why they chose to hold the wedding for 11 guests, most of them staffers, there. The other part was Jerry Richards, their officiant.

Azura runs a program called Mosaic Dreams for its 40 residents. Participants are asked to outline what their best day would look like. The staff then works to make those dreams a reality. For Mr. Richards, 81, a former professor of world religions at University of Wisconsin, marrying one more couple was the answer to the “best day” question. LeeAnn Richards, his wife, said he had married hundreds of couples as a Methodist minister and before his 2011 retirement. “Doing it made him happy,” she said.

Marrying Ms. Ranney and Mr. Zey, who he had become close with at Azura, made him especially happy. Though they had a second officiant, Wendy Slabak, a pastor at Menomonie United Methodist Church, on hand to marry them legally, Mr. Richards performed 90 percent of the ceremony.