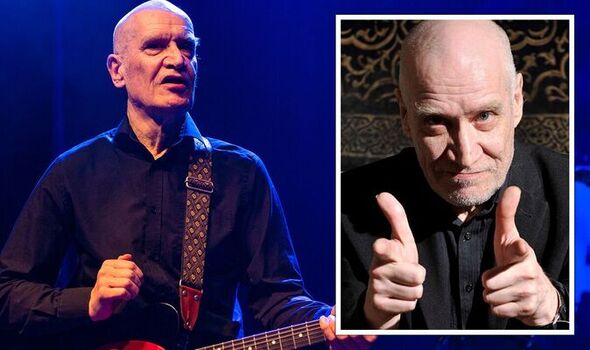 Wilko Johnson was an English guitarist, singer, songwriter and actor, who was best known for playing in the band Dr. Feelgood, who made their mark on music in the 1970s. His death was announced on his band’s official Twitter page this morning, as they paid tribute to the late star.

The social media post read: “This is the announcement we never wanted to make, and we do so with a very heavy heart.

“Wilko Johnson has died. He passed away at home on Monday 21st November.

“Thank you for respecting the family’s privacy at this very sad time. RIP Wilko Johnson.”

Wilko was diagnosed with late-stage pancreatic cancer in 2013 and had elected not to receive chemotherapy.

That year, he was told he had nine to 10 months left to live, but instead went on to release a whole new album, Going Back Home, in collaboration with the Who’s Roger Daltrey in 2014.

Later that year, he announced that he was cancer-free following a major operation to remove a three kilogram tumour.

Fans took the comments below to pay tribute to the late musician following the upsetting news of his death.

Liam penned: “RIP Wilko, what a cool guy!” while Andrew added: “He won’t be forgotten.”

Hanner wrote: “Absolutely gutted. I was diagnosed not long after Wilko and he always kept me going.”

BFTWNI commented: “One of the greats has gone! The man always seemed to be indomitable. An absolute legend. Farewell!”

Dli wrote: “Poor Wilko. When he was on Guitar Star a few years ago, he just came across as such a kind and generous man as well as a great player. Sorry for your loss.

While Dave reflected: “There aren’t many proper guitar heroes around now. Wilko was definitely one. What a presence on stage too.”

Walt remembered: “Saw him with the Feelgoods at Sheffield City hall and had the ridiculousl good fortune to speak to him the morning after at Sheffield train station…

Simon added: “Ah that’s really sad. A huge part of my formative years. A unique talent and a brilliant performer. Many condolences to all who held him close. RIP.” (sic)

Wilko delighted fans when he appeared in both the first and second season of the HBO fantasy series Game of Thrones in 2011.

He appeared in four episodes: season one’s The Kingsroad, Baelor and Fire and Blood, as well as Blackwater in season two.

Wilko and Dr. Feelgood were an influence on the English punk movement, earning praise from the likes of Paul Weller.

An official cause of death for Wilko has not yet been confirmed.