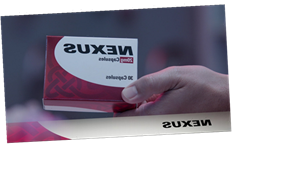 WandaVision is the weirdest release from the MCU to date, but it’s still bewitching all the same. Chief among the delights to be found in every episode is the TV era references, from the opening credit callbacks to the pitch-perfect ad break parodies. For those living for these fake product placements, Episode 7’s latest commercial interruption came with extra meaning. So what is Nexus on WandaVision, and should you call Dr. Strange to ask if it’s right for you? Let’s break it down.

Marvel’s ad isn’t just making fun of aughts-era marketing, where drug commercials became ubiquitous after the 2004 prescription drug bill made it legal for companies to advertise their products on TV. Nor does it fit the theory the ads are references to specific Infinity Stones. Instead, it’s a direct reference to something fans have been waiting to turn up.

The going theory ahead of the Marvel Cinematic Universe’s Phase 4 launch was the new saga planned to bring in the concept of the multiverse to screens big and small. Dr. Strange’s sequel ("The Multiverse of Madness") was a big clue. Fans also cited the need to fold in the X-Men and Fantastic Four, recently acquired from 20th Century Fox. With WandaVision billed as a lead-up to the Dr. Strange film and Evan Peters reprising his role as Quicksilver from Fox’s X-Men as part of the show, it seemed like multiverses were in the cards.

But this commercial is the first direct reference to a possible multiverse plot. While most fans were distracted by the Agatha Harkness reveal (and humming "Agatha All Along"), Marvel was dropping the multiverse right in front of their noses.

"Nexus" refers to "The Nexus of all Realities." This "cross-dimensional gateway" was first introduced in 1972’s Fear #11, discovered in one possible version of 2099. It is unknown if it was created or merely a natural point where all universes meet. But once it was open, it showed up in Doctor Strange, Fantastic Four, and Guardians of the Galaxy, to name a few. It also introduced the idea of "Nexus beings," those with the power to alter the Universal Time Stream and act as Nexus inflection points.

It is unclear if Agatha hopes to open the Nexus in Westview or if it’s already there, but it would explain why she pushed Wanda to establish the Hex over the random South Jersey town. It’s also an open question as to whether Wanda is, unbeknownst to her, a Nexus being or not.

But the reason fans should care is that Time Variance Authority monitors the Nexus.

The Time Variance Authority (henceforth the "TVA") is an infinitely vast bureaucracy dedicated to keeping tabs on every reality that exists. Their work mainly concerns tracking any and all temporal interference, and keeping disruptions to a minimum.

The TVA will be a significant player in Marvel’s upcoming Loki series, which premieres in May. The trailer suggests the trickster god will be arrested by them for his time travel exploits, and then, as he is technically deceased in his own time, hired as one of the many agents who work to keep the timeline on track.

Fans have already speculated the "big surprise guest star" coming to WandaVision‘s final installments might be Loki. The Nexus commercial seems like the first real proof of a tie-in between the two series. With only two more episodes to go, whether this ad spot is a warning flag of things to come or just a red herring remains to be seen.