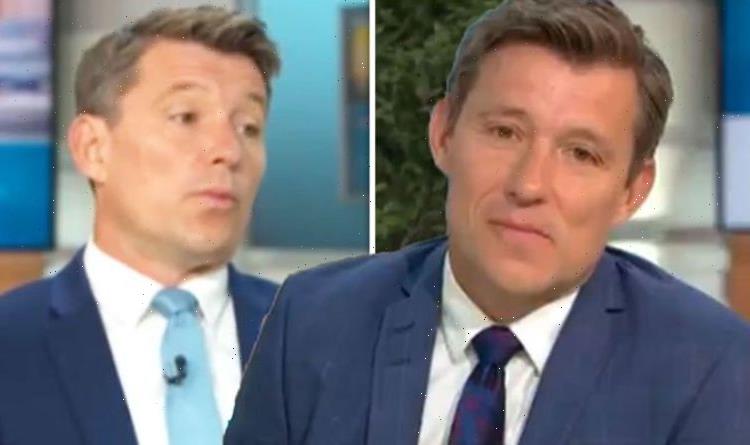 GMB: Ben Shephard on being asked if his injury was 'on purpose'

Ben Shephard has bid farewell to Good Morning Britain to go on a summer break. The ITV presenter shared the announcement in a candid Twitter post today.

The news comes after the broadcaster suffered a horror injury while playing football a few months ago, which left him needing surgery on his leg.

The 46-year-old took to the micro-blogging site and accompanied his departure post with a candid photo alongside GMB guests.

In view of his 777,000 followers, the host penned: “What a brilliant way for me to finish for the summer! Loved meeting these legends @galal_yafai and @Brownskinjessie every bit as humble and impressive as you’d imagine.”

Viewers commented on Ben’s announcement, as one wrote: “Amazing Ben, let’s hope you can recreate this picture in four years time. Have an amazing summer, if anyone deserves it, it is you. Hopefully next time we see you your knee will be a whole lot better, sending love from Blackpool.”

Another remarked: “Their interviews were great this morning. Many congratulations to both of you @galal_yafai @Brownskinjessie. Enjoy your hols @benshephard.”(sic)

Ben will be taking some time for himself and his family as the presenter continues his recovery.

During a match with his pals, the broadcaster tore his meniscus, ruptured his ACL and fractured his leg.

Ben took to his Instagram stories to share another update of his recovery progress following the live broadcast this morning.

The Tipping Point host could be seen with his leg raised with his physio equipment attached.

Ben’s knee was being stimulated by electric pads as his leg was extended, which he shared helped to “reduce swelling”.

The ITV presenter’s leg shook as he captioned the post: “It’s alive.”

When Ben returned to GMB for the first time since his surgery, he updated ITV viewers on his condition.

Speaking about his recovery, he admitted how his wife was “struggling” as he complained about his injury to her.

He made the admission after thanking viewers for their lovely messages.

Ben said: “If it’s at all possible, could you send some of that love to my wife?

“Because she’s the one who’s really struggling.”

Elsewhere, the GMB host said goodbye to Sky Sports presenter Will Greenwood after the rugby union expert revealed he would be stepping down from his role after 16 years.

Among those sending the sports presenter well wishes was Ben who wrote: “Congrats Will on a brilliant stint – can’t wait to see what’s next.”