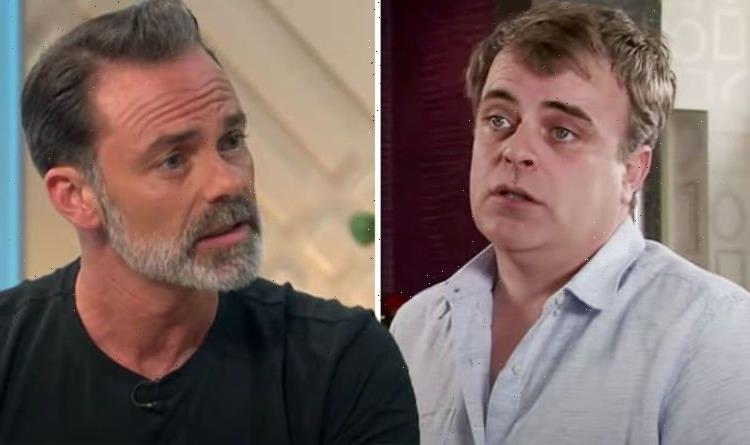 Daniel Brocklebank, 41, has detailed the difficulties he and Simon Gregson, 46, faced while filming a Corrie scene together recently, as they couldn’t contain their giggles. Daniel revealed that Simon, who plays Steve McDonald in the ITV soap, struggled to keep a straight face when he had to wheel himself into the Rovers Return Inn as his character, Billy Mayhew, was in a wheelchair at the time.

Addressing the moment in an exclusive interview with Express.co.uk, Daniel recalled the “hilarity” the pair experienced due to his “quiff gliding across the bar” in the scene.

Daniel said: “Simon Gregson, who plays Steve McDonald, is literally one of the funniest men I’ve ever met and we have terrible difficulty keeping a straight face when we’re working together.

“There was a storyline a few years ago where my character got thrown off of a cliff on Christmas Day. The character spent a few months in a wheelchair.

“And there was one scene where I had to wheel myself into the Rovers, and Simon, Steve, was behind the bar, all he could see was my quiff gliding across the bar.”

Laughing at the memory, Daniel admitted: “We couldn’t do it! I mean, it was just… there is a lot of hilarity and the wonderful thing about a show like Corrie is not just the cast, but the crew as well.

“If I was doing a movie or a drama, you might only be working for six or eight weeks with those people, so you don’t have time to build up those relationships.”

Gushing about his seven years as part of the Coronation Street cast, Daniel added: “I feel like the luckiest man in the world where I work.

“It’s a truly joyful place to be, even under the current circumstances.”

Daniel, who lives alone, went on to describe his work on Corrie as a “lifesaver” during the various coronavirus lockdowns, as he looked forward to getting the chance to socialise on set.

The actor explained: “I mean, obviously, we’re very much looking forward to things slowly returning to what we had.

“But for me personally, this last year, Corrie has been an absolute lifesaver mentally because it’s given me social contact, it’s given me something to look forward to in a week.

“We work Monday to Friday and you don’t necessarily work the whole week. So I might have only worked two days in that week.

“But those two days were an absolute lifesaver because that meant two for the other five, when I was sat in the house staring at the walls or walking my dogs.”

The former The Bill actor went on to candidly recall his struggles during lockdown, admitting: “I didn’t see a single person for three months.

“I’m single, I’ve got no kids, and it was incredibly difficult.

“I’m a gregarious person by nature, it was absolutely horrific.”

He continued: “The one respite for me is being able to go into work, which obviously enabled me to see people there.

“Although the conditions that we’re working under are very different to what we would normally have.

“We wear a mask the entire time unless we’re doing a take, we have a one way system in the building now so that we don’t cross each other, we’re doing our own hair and make-up.”

Describing other behind-the-scenes changes for safety reasons, the soap star added: “The green room, up until very recently, had furniture removed from it so that we couldn’t congregate, or socialise.

“It was quite sort of sitting alone in my house 24/7 and then going into work and dressing room alone until I was pulled down to set. Although it was respite, it was still not.”