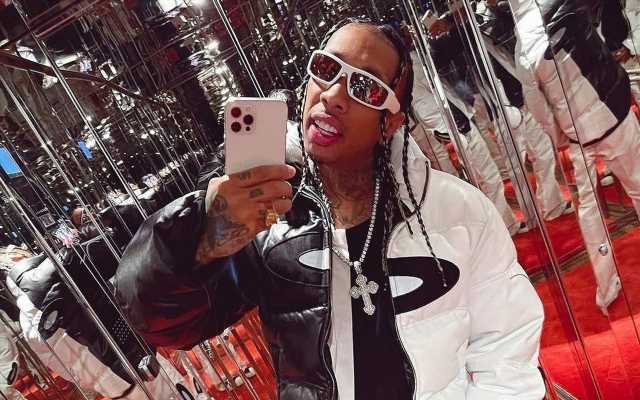 The ‘Rack City’ rapper has been arrested after he voluntarily turned himself in to Los Angeles police following accusations that he assaulted former girlfriend.

AceShowbiz -Rapper Tyga has been arrested after voluntarily turning himself in to Los Angeles police on Tuesday (12Oct21) following an alleged altercation with his ex-girlfriend, Camaryn Swanson.

She accused the star of hitting her and posted shots of her battered and bruised face online.

Prior to his arrest, cops confirmed Tyga, real name Michael Stevenson, was co-operating with them. He was booked for felony domestic violence and his bail set at $50,000 (£36,800), according to Rolling Stone.

The alleged altercation between Tyga and Swanson reportedly took place on Monday morning after the accuser showed up at the rapper’s home.

Captioning photos and videos of her bruised cheek and eye and bloodstained cuff, Swanson wrote, “I’ve been emotionally, mentally, and physically abused and I’m not hiding it anymore.”

She added, “I’m so embarrassed and ashamed it had to get to this but I have to stand up for myself.”

She also shared a text message exchange between her and an unidentified man that suggested Tyga had sent a car to pick her up and transport her to his house.

“I didn’t show up ‘screaming’ or uninvited,” she wrote, contradicting a TMZ report. “When I tried to leave he physically assaulted (me) and refused to let me leave for hours.”

Tyga was previously engaged to Blac Chyna whom he shares a son with. They broke up in 2014. The rapper also used to date Kylie Jenner while Blac Chyna went on to get engaged to Kylie’s brother Rob Kardashian. Tyga and Kylie split in 2017. Blac Chyna and Rob called it quits in the same year after welcoming daughter Dream.