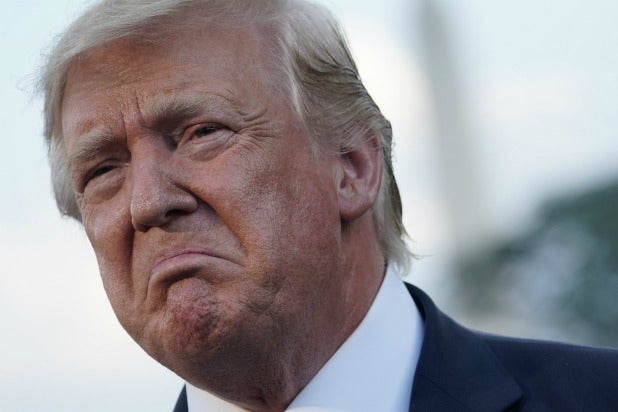 Twitter has removed a video meme posted by President Trump that featured Canadian rock band Nickelback on Thursday morning for violating its copyright rules. It pulled the clip less than 24 hours after the president tweeted it.

The tweet included an edited clip of the music video for Nickelback’s “Photograph,” with frontman Chad Kroeger singing, “Look at this photograph, every time I do it makes me laugh,” as the video zoomed in on a picture of Joe Biden, his son Hunter Biden, and a “Ukraine gas exec.”

The photo from 2014 shows the Bidens with Devon Archer, who previously served on the board of Burisma Holdings, a Ukrainian natural gas company, according to The Hill. Before the video showed the picture, it included a soundbite from the former vice president saying that he had “never spoken to my son about his overseas business dealings.” Trump’s tweet quickly went viral, racking up more than 100,000 retweets.

The tweet, including the all-caps caption “LOOK AT THIS PHOTOGRAPH,” was still live on Thursday morning, but the video has been removed. “This media has been disabled in response to a report by the copyright owner,” a blurb now reads in place of the clip.

Warner Music filed the copyright complaint, according to the Lumen Database, a site tracking complaints.

A rep for Warner Music, as well as a rep for the band, did not immediately respond to TheWrap’s request for comment.

This is the second time this year Trump has run into a copyright issue on Twitter. In April, a clip featuring music from “The Dark Knight” was yanked after Warner Bros. filed a complaint.