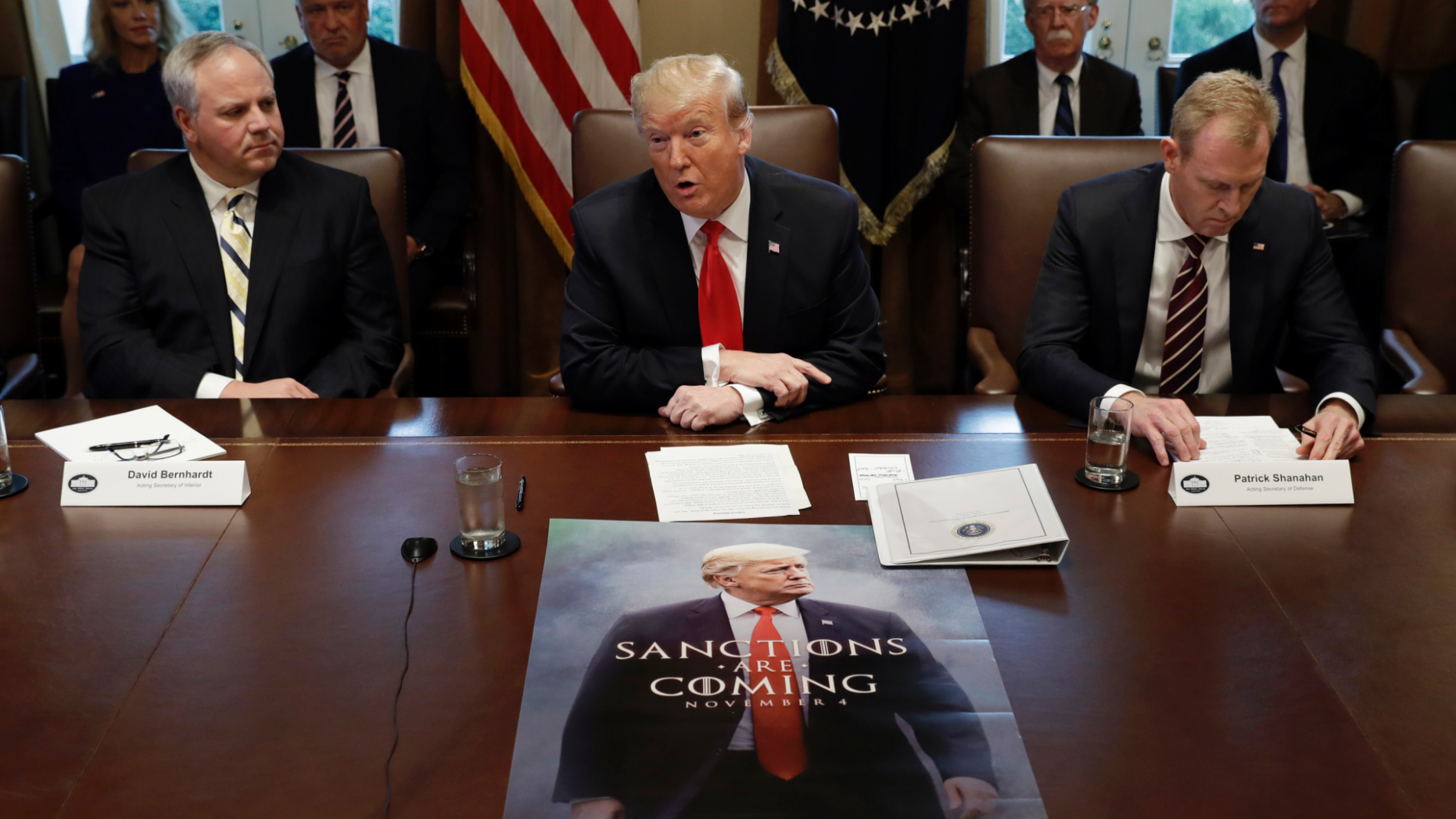 A "Game of Thrones"-style poster that many believed was a simple digital parody became a reality Wednesday as a print-out was placed in front of President Trump during a Cabinet meeting.

The poster contains the warning "Sanctions Are Coming" — a spoof of the Stark family's iconic phrase "Winter Is Coming." It was first debuted on Trump's Twitter account on Nov. 2, as the Trump administration prepared to announce new sanctions from the "Westeros Wing" on Iran, completing the removal of the U.S. from the 2015 nuclear deal.

The image, which went viral with nearly 65,000 retweets, sparked a flurry of responses. HBO, in particular, wasn't pleased by Trump's use of the hit show's motto.

"How do you say trademark misuse in Dothraki?" the network asked, gathering roughly 35,000 retweets.

Maisie Williams, who plays Arya Stark of Winterfell in the fantasy TV series, simply replied with, "Not today."

George R.R. Martin, the author of the “Song of Ice and Fire” series, created his own "Thrones"-like poster to encourage fans to vote.

Trump apparently opted to ignore his critics this week, placing the poster on the table Wednesday as he spoke to reporters about a myriad of issues, including the partial government shutdown that has plagued Washington for more than a week. While it's currently unclear why exactly the White House decided to display the poster, Trump did provide an update on Iran.

“Iran is a much different country than it was when I became president," Trump said, according to The Washington Post. “Iran is in trouble."

Several publications pointed out the poster — and many Twitter users were ready to discuss its possible hidden meaning.

"I'd like to know the thought process of putting it (or is it a stack of them?) on the table. Perhaps he stays after the cabinet meeting and signs autographs?" another user asked.

"Who are we sanctioning and why?" one man then questioned.

"You've got to be kidding," another chimed in.

'GAME OF THRONES' SEASON 8 RELEASE DATE, CHARACTER COMEBACKS AND EVERYTHING ELSE YOU NEED TO KNOW

Trump previously said that in addition to the Nov. 5 sanctions, the U.S. "will pursue additional sanctions, tougher than ever before, to counter the entire range of Iran's malign conduct."

"Any individual or entity who fails to comply with these sanctions will face severe consequences," he warned.