AceShowbiz –
No, Travis Scott (II) is still loyal to his girlfriend Kylie Jenner. Rumors of him cheating on his baby mama have been running rampage after a photo of what appears to be him cozying up to a bikini-clad woman made the rounds through internet, but the “Sicko Mode” rapper has set the record straight that it wasn’t him in the photo.

Taking to the comment section of an Instagram post of the picture, Travis savagely called out trolls for faking the cheating rumor. “S**t capp a*** f**kkkk TMZ ain’t post this s**t,” he wrote. “Trolls working hard today. I don’t be on balcony wit no t**ts. That s**t lame. Try again u trollsssss. Me and my wifey sturdy. Back to celebrateing !!!” He added in another comment, fueling their engagement rumor, “Only got love for my wife. No time to be wasting. Try again.”

As if that wasn’t enough to convince people how loyal he is to Kylie, Travis went the extra mile to post a note on Instagram Stories. “Trolls always wanna create some fake s**t to destroy real love,” he said. “GOING OVER BOARD TO MAKE S**T LOOK LIKE IS NOT IS EVIL. I hate acknowledging s**t. But quit try to take joy from s**t that’s good. I pray god blocks out all evil.” 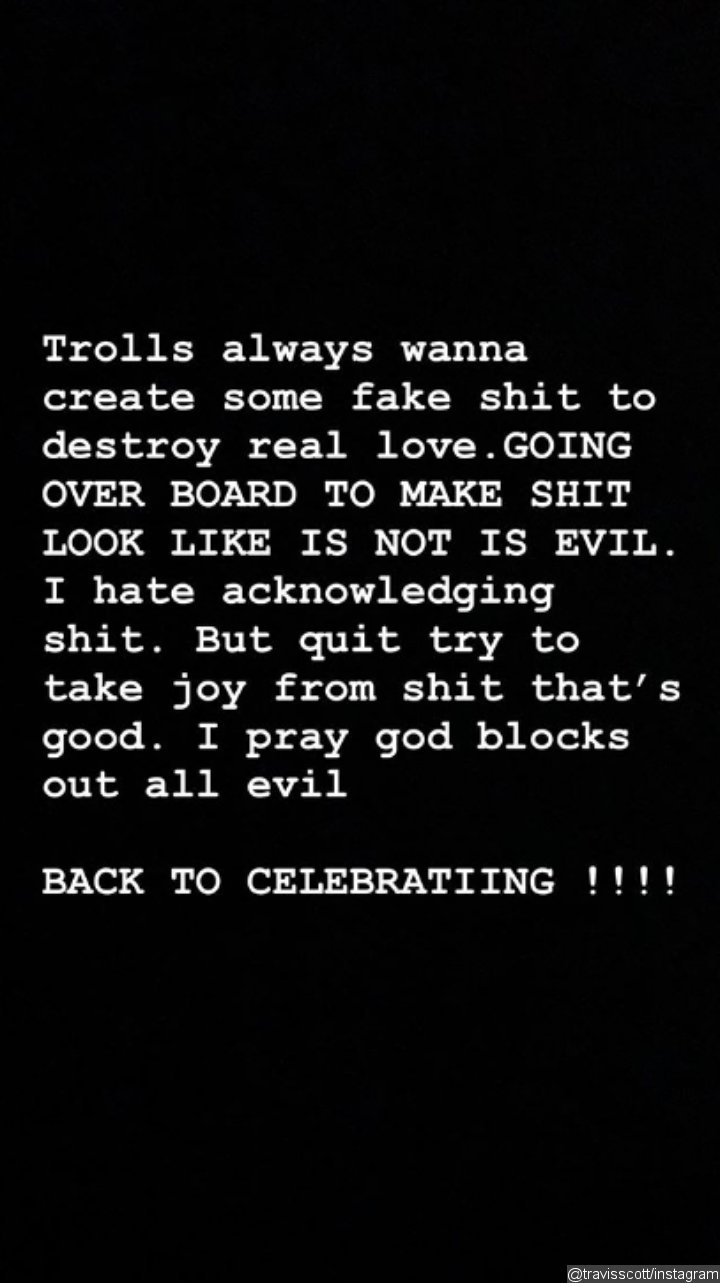 It does look like that things are still going really well for Travis and Kylie. After all, the “Life of Kylie” star recently appeared to confirm that she’s engaged to the “Butterfly Effect” rapper via an Instagram Stories post. She shared on the platform a picture of them getting cozy together along with a ring emoji, making people wonder whether the engagement rumors are true. However, she has yet to respond to their burning question.

Travis and Kylie started dating in April 2017 after meeting at Coachella. They welcomed their first daughter together, Stormi Webster, on February 1.