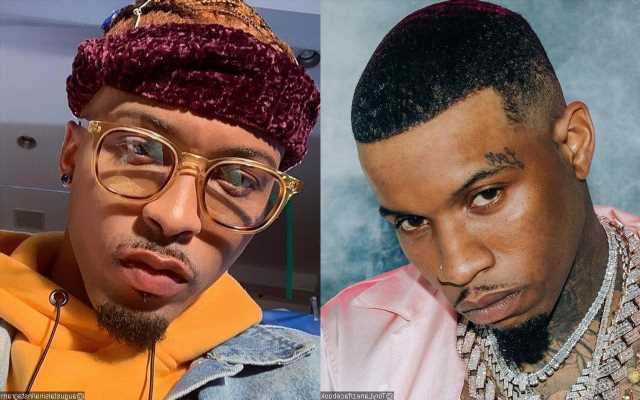 The Canadian hip-hop artist is being investigated by Los Angeles District Attorney after he’s accused of assaulting the ‘I Luv This S**t’ singer after the latter refused to shake his hand.

AceShowbiz -Did Tory Lanez really attack August Alsina? The “Say It” spitter is now under investigation by Los Angeles District Attorney after the “I Luv This S**t” singer claimed that he was physically assaulted by the rapper.

On Monday, September 19, the D.A’s office released a statement to Pitchfork that read, “We are aware of the allegations that the defendant attacked artist August Alsina and are investigating these claims.” It also stated that “the allegations are serious and will be thoroughly examined.”

It is unclear whether this may affect Tory’s legal case with Megan Thee Stallion. The Canadian hip-hop star faces charges including felony assault in the 2020 shooting where Megan named her former friend as the person who shot her in the foot. He has pleaded not guilty and is currently out on bond. He has had his bail increased.

According to August, the alleged altercation happened on Saturday night, September 17. Alongside a picture of him sporting bloodied jaw in an elevator, the former Def Jam Recordings artist detailed, “As I’m exiting the building after the show last night, A 4’11 sized leprechaun ran down on me w/ 8 oversized security n***as, whom I greeted each individually upon their walk up as they tried to press me.” He further stressed that he was alone, saying, “Whole time, I’m one deep. No security.”

August also said that he believes Tory hit him after he ignored Tory’s attempt to shake his hand. In the post, August explained that he refused to shake Tory’s hand as he’s told by his doctor to “shake as less hands as possible due to corona, & monkeypox.”

August claimed that he “was a bit confused” at how Tory turned himself up “w/ anger after hitting a blunt laced with cocaine obviously,” noting that he “heard the fizzle.” August continued recalling, “he snuck me when I turned my head to move to the side amongst all his antsy moving and to keep an eye on the endless n***as that was w/ him surrounding me, which was security and some n***a with a gun tucked… whom he then proceeded to run behind and hide to run back in the building.”

Seemingly responding to August’s accusation, Tory posted a cryptic Instagram Story that read, “I don’t know what everybody talking about…” He further claimed that he has “been in the studio…,” adding that he’s “not in anything negative” and that he’s “been working on my myself… and being a better person.”

Further maintaining his innocence, Tory told DJ Akademiks that “nothing happened” between him and August. “The Color Violet” spitter said in a podcast interview with the social media star, “I don’t even know what the kid is talking about.”

Elsewhere during the conversation, Tory subtly accused August of taking advantage of the situation to promote his skincare line Encina Wellness. “I don’t know if he is doing promo, I don’t know what that n***a is talking about,” so he said.