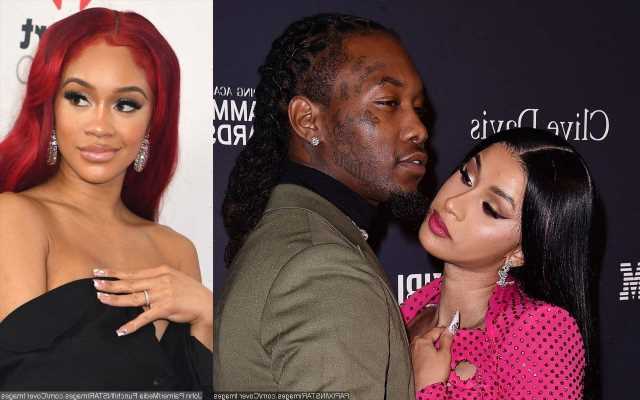 Rumors about Offset cheating on Cardi with Saweetie first surfaced in August 2022 after Nicki Minaj’s stylist, Khalil, brought up the allegations on Twitter.

AceShowbiz –Cardi B didn’t feel the need to address rumors about Offset and Saweetie‘s alleged hook-up. The “WAP” hitmaker had her own reason why she stayed silent, and now she revealed it in an interview with her pal Jason Lee.

“You know why I was quiet? I was quiet because one thing I’m gonna do, I’m gonna find out the truth,” the 30-year-old declared. “And you know that I was finding out that truth… So, it’s like, if I entertain something that I know is not true, on the internet, people be like, ‘Oh, it is true because you’re addressing it.’ “

“But when I don’t address it, it’s true or not, as well,” the mom of two added. “So, Im like, you know what? I’m just not gonna entertain the bulls**t, because if I entertain it, it’s gonna keep goin’ longer and longer… At the end of the day, I know what’s going on in my house.”

Cardi went on to recall her experience when dealing with previous rumors surrounding her husband. “When the Selena girl said she was pregnant by Offset, and she was showing her stomach,” she said, “She even showed the baby and everything. And I was going so hard like, ‘It’s not true!’ Every single time that I kept saying this, it’s not true, people on purpose kept saying, ‘It’s true!’ “

“So, it’s like, I have learned from those experiences not to even address things that’s going on in my home,” the Grammy winner further noted. “When I know the truth. ‘Cause it’s like, people gonna make it worse, ’cause it’s just entertainment.”

Rumors about Offset cheating on Cardi with Quavo‘s ex-girlfriend first surfaced in August 2022. The gossip was brought up by Nicki Minaj‘s stylist, Khalil, who tweeted, “Offset f***ed Saweetie! Do you wanna really discuss husbands?”

To this allegation, Cardi replied, “Ouuuuuu my man got a couple weed charges and gun charges cause he ain’t no P***y and was a hustler …rather d**k slinging then taking P***y from b***hes.” She continued, “You bringing my nikka up trying to get me mad …LETS NOT TALK ABOUT HUSBANDS NOW.”