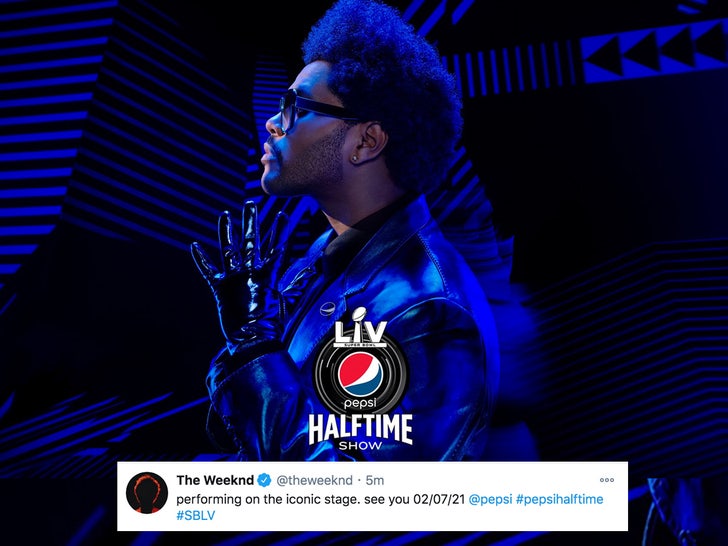 … as long as there’s still a Super Bowl in February!!!

The superstar broke the news Thursday morning — “We all grow up watching the world’s biggest acts playing the Super Bowl and one can only dream of being in that position. I’m humbled, honored and ecstatic to be the center of that infamous stage this year.”

Weeknd was booked through Jay-Z‘s Roc Nation agency — which has a partnership with the NFL.

The game is set to take place on Feb. 7 at Raymond James Stadium in Tampa, home of the Buccaneers.

As for fans … the NFL has previously said it was “hoping” to have thousands of spectators on hand for the game — but nothing is set in stone because of the COVID pandemic.

League reps have said they are preparing for all possible scenarios — which includes few to no fans.

Obviously, that would make things weird for The Weeknd — performing in a massive stadium, on a massive stage with no live crowd reaction.

But, even if there aren’t fans in the stadium, the Super Bowl draws a MASSIVE global audience on TV — Super Bowl 54 (Chiefs vs. 49ers) back in February pulled in 102 MILLION viewers!!

Of course, the halftime show for that game was epic — Shakira and Jennifer Lopez!!

So, how does The Weeknd plan to follow those legends??

He’s got a pretty great catalog — with hits like “Can’t Feel My Face,” “Starboy,” “The Hills Have Eyes” and many many more.