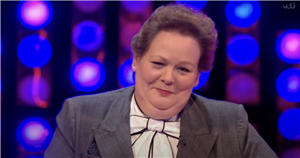 Anne Hergerty discovered to her shock that she is related to the Queen in an episode of ITV’s DNA Journey which aired on Monday.

The Chase star found out on the show that Queen Elizabeth II is her 19th cousin and that King Robert the Bruce was her great grandfather 20 times over.

When the connection was revealed to Anne, she confessed that she had already been told this information by her grandmother – although she didn’t believe her at the time.

“Wow, that is cool. But my grandmother was the most tremendous liar,” I'm a Celeb star Anne said on the programme.

Anne learnt in the episode that through her mother’s side she is related to family with the surname Hayes and that one of those members ended up marrying the King of Scot’s daughter Princess Elizabeth in 1370, leading to her connection with the Queen.

The 63 year old discussed how her mother didn’t wish for people to know about their connection to the Royals, as she did not want her daughter growing up to be a “snob”.

“My mother was always deeply disapproving of the idea of anyone knowing about their ancestors. She'd say, ‘It doesn't prove a thing, dear,’” Anne said.

“As a child I was always curious about this stuff and my mother was always very repressive.

“I think it was because on my mother's mother's side there's quite a bit of posh, and my mum thought I'd grow up to be a terrible snob.

“But I've already grown up to be a terrible snob, so really there's nothing to hide.”

Anne’s co-star on The Chase, Shaun Wallace, teased the star after discovering the surprising news on the show as he joked: “You're a closet royal! Don't be lording it over me now. I'm not calling you Queen Anne on The Chase — I refuse.”

This Royal revelation comes after it was recently announced that Anne would be stepping down as ‘The Governess’ on upcoming series of Beat the Chasers, after she tested positive for Covid-19 during filming.

In a statement made about her absence on the ITV show Anne said: "Unfortunately I’ve contracted Covid-19 so won’t be filming this series of #BeatTheChasers.

"The fantastic @Issa25 will be stepping in for me and I’m looking forward to watching the series when it’s on air later this year."

The TV personality will be replaced by Aussie Chaser Issa Shultz, otherwise known as 'The Supernerd’.