The Challenge star Nelson Thomas was arrested for theft in Texas on Thursday, December 20, Us Weekly can confirm.

The American Crime alum, 30, was charged on a case of Class B theft which is an offense based on the stolen property being under $750 according to the Texas Constitution and Statutes. According to Hays County courts records, he was released on Saturday, December 22.

Thomas took to Twitter on Saturday to share his side of the story. (The Ashley was the first to reveal the news of his arrest.)

“Everyone has a past. No one’s hands are clean but God. I was not arrested. I turned myself in to clear my name on a charge from 5 years ago,” he wrote. “This was an alternative to probation. I’ve been in full cooperation with all law enforcement. If you do the crime, do the time like a man.”

The reality star added: “No regrets. Only lessons. Thank you to all my fans that continue to support me through the ups and downs.”

According to records on the Hays County Courts database, this isn’t the first time Thomas has had a run-in with the law. He was also charged twice for driving with an invalid license, once in 2011 (that same year he was charged for driving with expired registration) and another in 2016. 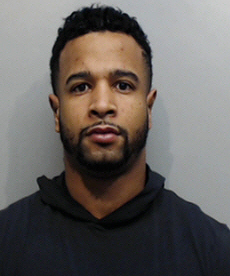 Thomas has appeared on five seasons of The Challenge from 2016 to 2018: Rivals III, Invasion of the Champions, Dirty 30, Vendettas and Final Reckoning.

Us Weekly exclusively revealed in November that Thomas would be joining season 2 of Ex on the Beach alongside his ex-girlfriend Nurys Mateo. Other cast members include Teen Mom alum Farrah Abraham, Bachelor Nation’s Chad Johnson and Big Brother’s Monte Massongill.

Prior to his stint on the The Challenge, Thomas appeared on season 3 of MTV’s dating series Are You the One? in 2015.