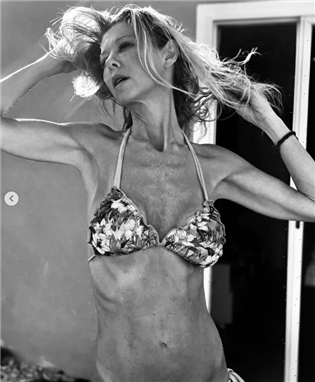 There was a time when Tara Reid was a regular staple in the pages of supermarket tabloids.

And yes, that time was so long ago that people got their celebrity news from the checkout aisle.

These days, we don’t hear much about the American Pie star, and that’s probably just fine by Tara.

After all, the media wasn’t exactly kind to her in her younger years.

Last we heard from her, Tara was comparing herself to Britney Spears and insisting that her Hollywood story is wild enough to warrant a few documentaries.

Of course, when she said that, she made it clear that she wanted at least some control over the kind of attention she would be receiving.

Possibly to her chagrin, Tara is back in the news this week, and just as before, she’s experiencing all the worst parts of being celebrity.

The trouble started when she posted a bikini pic that prompted a lot of unsolicited health advice from commenters.

“Nothing better [than] your friend taking hot artsy pics of you in Palm Springs,” Reid captioned the photo above.

Clearly, Tara was proud of the pics, but the remarks from her followers were so rude that she felt she needed to respond.

“No one needs to be body-shaming. It’s not right, it’s not cool and it hurts people. Please don’t be one of those people, it does have an [effect].”

Tara then turned comments off completely and addressed the issue of the hate she had received in a subsequent post.

“To all who made their great comments exposing their hate for my artsy picture I posted yesterday, it was the angle,” the actress captioned her latest pic.

“Here is another picture from yesterday to show you I am not too skinny; I have a high metabolism,” Reid continued.

“Anyone with a high metabolism understands it’s impossible to gain weight. All I do is eat.“

But it wasn’t all bad.

Reid still has quite a few supporters, and many of them were quite vocal in their defense of the 45-year-old.

“To everyone who wrote something nice and stuck up for me, I love you!” Tara wrote.

“And keep spreading that love, it is the only thing that will save this world.”

To be fair, some of the comments seemed to be made out of genuine concern for Tara’s health, but they were still inappropriate.

You wouldn’t walk up to a stranger on the street and offer health advice based on nothing but their appearance, so you shouldn’t do it on social media, either.

As we said earlier, Tara has experienced quite a few ups and downs over the years, including some very well-documented struggles with substance abuse, and at least one plastic surgery that appeared to have been badly botched.

But these days, insiders say Reid is sober, she’s working (she continues to play a main role in the popular Sharknado series), and she’s finally found a modicum of stability.

So if you’re planning on offering any unsoliced advice on how she should live her life — yeah, instead, just don’t do that.