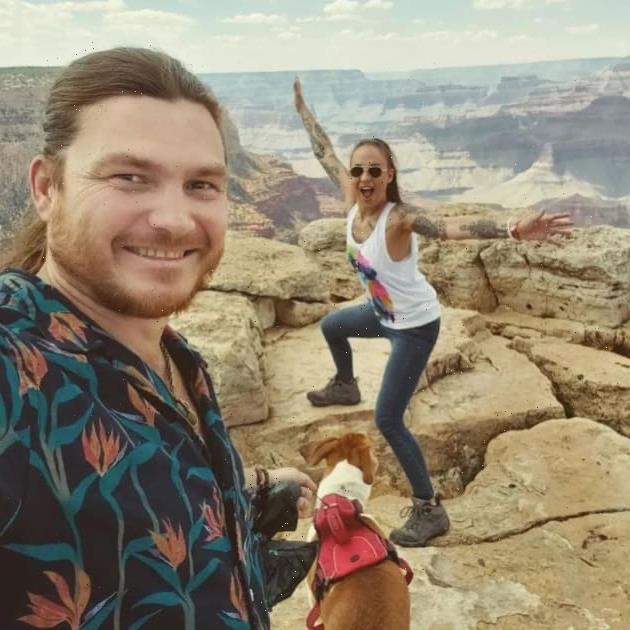 Recently, Syngin Colchester teased a return to 90 Day Fiance … but there was something off.

Rumors that Syngin and Tania Maduro broke up have been circulating, and have only intensified.

Now, photos have shown Syngin with a mystery woman whom some believe to be his new girlfriend.

Will Syngin and his new gal pal be appearing on The Single Life … or are fans jumping to conclusions?

Erin is a fun-loving woman who has appared in photos with Syngin Colchester.

We don’t know her last name or the exact nature of their relationship aside from what we’ve seen on social media.

But while being photographed with and following a woman doesn’t mean anything on its own … where exactly is Tania?

Now, we all know that he enjoys spending time in nature (that’s how he was injured much earlier this year).

But while someone clearly snapped this photo of him, not everyone was convinced that the photographer was Tania.

Interestingly, Syngin teased fans that his return to reality television was mere months away.

At first, some speculated that this meant that he was coming back … only to appear on The Single Life, without Tania.

Did they break up? It’s possible … but the timeline doesn’t quite fit.

See, though The Single Life has likely been recording recently, it won’t premiere until well after Syngin’s suggested return.

You know what does fit, though?

90 Day Fiance Season 9. If Syngin’s coming back to that show, he wouldn’t be flying solo — he’d be with Tania.

That doesn’t mean that they’re still together here and now, however.

It is possible that we could see Syngin and Tania together and then break up during the course of Season 9.

The season would have concluded filming months ago and is likely still in the editing process as they fine tune footage for maximum drama.

If Syngin and Tania did break up during that season, or in the months that followed, Syngin could appear on The Single Life.

A lot of fans like him (and no matter what you see on social media, plenty of people like Tania, too) would like to see more.

If Syngin is back, we could see him date — or even meet — Erin, if that’s really where things stand at the moment.

If Syngin and Tania did break up, what did them in?

We can only speculate … but there’s a lot of material to work with.

As much as we might enjoy the raw hotness of this couple, they had a lot of issues.

They have different attitudes towards life as a whole.

Tania is ambitious and likes to have concrete plans about the future.

Syngin is more laid back and wants to have fun and enjoy his life.

Speaking of enjoying life versus making solid plans … they were on totally different pages when it comes to family.

Tania told Syngin that her biological clock is ticking and she would like to have children.

Notably, fertility and health are interests of Tania’s. Not so much for Syngin.

Disagreements about Syngin’s drinking, what they want out of life, and more were always difficult to contain.

Having vocal, bitter arguments in front of family is not an encouraging sign.

Believe me, I’d have loved for them to have both woken up one day on the same page and conflict-free … but that’s not realistic.

Until we know more, we can only speculate.

The good news is that further details are bound to come out during Season 9 of 90 Day Fiance if we’ve interpreted Syngin’s teaser correctly.

We wish Syngin and Tania the very best, no matter where things stand. Whether or not they’re right for each other, they’re good people. Also, hot people.