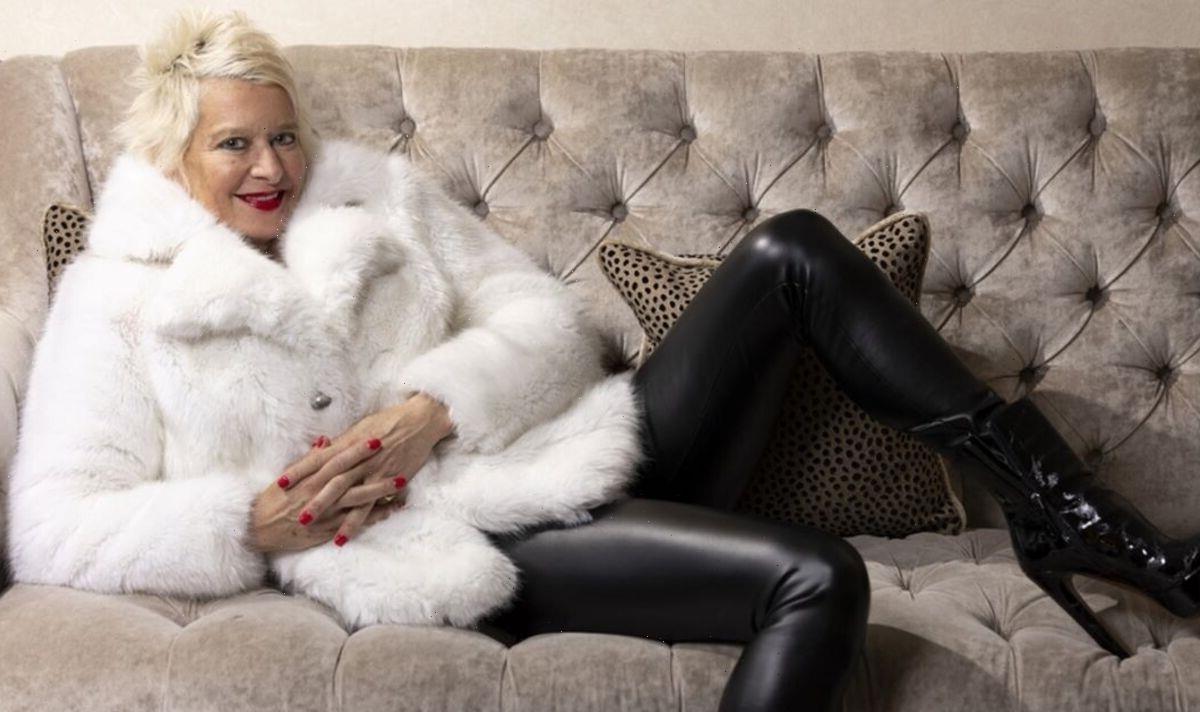 Behind the scenes of Alison Jackson's 'Royal Night In' photo shoot

The amusing paparazzi-style shots have included, among many others, Donald Trump getting a spray tan; the Queen, Camilla and Kate having their hair done; and David Beckham clad only in his pants and fluffy oven gloves cooking fish fingers for his wife Victoria. But until last month, the Queen was the photographer’s number one muse.

Jackson famously staged lookalikes of the Monarch shopping at Tesco and eating breakfast in bed with her corgis. Her passing put an immediate end to any more such pictures.

Now, the mischievous photographer admits she lacks a convincing doppelgänger for her biggest future moneymaker. “I don’t really have a King Charles,” she says with exasperation.

Twenty years after making the BBC series Double Take, she is in discussions about another TV show. Nothing is confirmed but she lets slip that she is fascinated by Charles’s irritation with leaking pens. The King vented his frustration with them during his proclamation and a separate book signing at Hillsborough Castle last month.

“In my television series in the past, if there was a clip like that, I would always make a continuation from “before” to “after”, which is always fun… it’s the guessing game of how did that [moment] arrive like that?” she explains.

So she plans to reimagine it in some way? “Absolutely, yeah it’s fun.” But hang on, she has created cheeky scenarios of Charles before so must have a lookalike? “Well, you never see his face if you look at my photos,” she replies. Are there not tons of Charles lookalikes gearing up for duty?

“Not yet,” she says. “And I find it difficult to see what he looks like because he’s got a mobile face. There is one Prince Charles guy who’s great, but he’s an impersonator… he doesn’t necessarily look like King Charles.”

She has pressed pause for now, out of respect for the Queen, but insists: “We’ll see what Prince Charles is like as King. He’s very different from his mother – he doesn’t zip up. Prince William is zipped, the Queen was zipped; Charles likes to talk.”

As devilishly frank with her words as her images, Jackson is an entertaining interviewee. We are meeting to discuss her recent photography competition, A Day In Your Life, which invites budding photographers of all ages to capture a slice of life, with the winning entries displayed at the Saatchi Gallery.

Jackson, who lives in London, looks incredible at 62 in skin-tight black leather trousers and high heels, offset by scarlet lips and platinum cropped hair. Her voice is gruff; she is working all hours running additional workshops and is exhausted.

But three designer jackets hang off the back of a chair in preparation for our photo shoot and when the camera flashes, she works the poses. Her own images typically test the boundaries of decency, tapping into questions of public voyeurism and the murky line between reality and falsehood.

Yet here she is nurturing young talent in straightforward imagery. Now in its third year, the competition has four age categories, starting with seven to 12-year-olds, and formidable judges, photographer Rankin and Sir Trevor Phillips. What is her motivation?

There’s a gap there, the kids need creative tuition at a young age and they love it. It can set them on a different path in their lives and gives them an option. They don’t have to take a boring job, they can do an exciting or creative one.”

Her own photo session over, she sits next to me on her plush sofa sharing some expert shots I would never have guessed were taken by youngsters.

“Photography isn’t just photography,” she says. “I can see which ones are directors, stylists, models, actors and gymnasts because they’re doing it all in front of the camera. So this one vehicle, a camera, opens up various possibilities.”

She first picked up a camera when she was nine, but did not know what to do with it. “I didn’t go to college at a normal age. I worked in TV production, and they [the production bosses] wouldn’t allow me to direct films because they wanted men to direct them.”

It was in 1999, aged 30 and studying at the Royal College of Art, that she first came to national attention and narrowly dodged expulsion.

She applied to study sculpture but the college insisted she was a photographer based on pictures she took of her artworks. “Suddenly the whole of my body of work was how much I hate photography and that you can’t trust it,” she reflects. “It’s a slimy, deceitful medium. You think you can believe it but it seduces you and plays a terrible trick on you.”

“Very few people had met her but people were hysterical over her death and I thought it was bizarre,” she says. “They only knew her through images and stories.”

She combined both trains of thoughts. Her earliest picture was a fake Princess Diana giving the middle finger to the photographer but, as she experimented, she was threatened with breach of copyright from a leading photographer, which nearly led to her expulsion.

Undeterred, she imagined private scenarios and shot actors posing as Princess Diana and Dodi Fayed doting over their baby. The image shocked a nation. “I was raising questions,” she says.

“Now everyone talks about fake news but then people didn’t question what they saw. I’ve always been clear that these are actors with wigs or lookalikes. This is not real. Even today when my work goes viral on social media, people ask if it’s real.”

She has nearly been arrested multiple times and was nearly sued for staging spoof pictures of Donald Trump appearing to be in a compromising situation in the Oval Office with Miss Mexico, and walking with the Klu Klux Klan. She has no regrets.

“I never put any work out unless I feel I can stand by it. End of story.”

She is a royalist, she stresses several times. An especially shocking image of the late Queen in the loo was about breaking taboos.

“You can’t imagine the Queen on the loo but she too is human. It was trying to humanise her because the thing about imagery is that it totally desensitises you to what the real person is like. It creates a false picture and a lie about the person around them.”

She has blurred reality on occasion by featuring real celebrities in the faux scenarios, notably Elton John with a doppelgänger Queen. To Alison’s horror, she was once seated at the same table as the late Monarch at a dinner. The host pointed Alison out.

“I thought, “Oh my God, I wish the ground would swallow me up and make me disappear”, but she was smiling. She had a great sense of humour.” The Queen Consort is also a fan.

“I hear Camilla collects my books,” Allison says. Her younger Camilla wearing the crown as she holds a cigarette and drink still goes viral as does Bill Clinton receiving a bedroom massage.

She has decided Islamic State is too dangerous a subject matter but did once do a show about Osama Bin Laden. “The anti-terrorist squad used to follow me around a bit,” she recalls. “And I got a few weird phone calls. You have to be careful, but I haven’t done anything too tricky lately.”

She is currently planning something involving Ukrainian President Volodymyr Zelensky and Vladimir Putin. Does she worry about the latter’s reaction?

“I run after people down the street, it’s terribly embarrassing. Can you imagine running after someone who looks like Putin saying, “Oh, you look exactly like Putin.” They’re not actually going to be pleased.”

Her friend chased down a “very good Zelensky lookalike” in England a month ago but he has got a full-time job, so she is still on the hunt for another one. All in all, it sounds like a thankless merry-go-round of exhausting work.

Jackson spends days on a single photoshoot, styling every blade of hair into place. She snaps hundreds of photographs at a time.

“The reason why nobody’s been consistent with copying my work is that the styling and the angles on the lookers are incredibly difficult to do,” she says. “If you don’t get it absolutely right, it’s not believable, the spell’s broken.”

This year, she made £100,000 for a platinum sculpture of the Queen for her Platinum Jubilee. She has also created portraits of A-listers including Benedict Cumberbatch, Vanessa Redgrave and Eddie Redmayne.

Her father was George Hulbert Mowbray-Jackson, who inherited the grand estate of Poulton Priory in Gloucestershire. Jackson has previously recalled there being an “army” of help servicing the home’s tennis courts and petrol pumps for the family’s motors.

But she was left without a penny after it was left to her older brother upon her father’s death and he sold it for £11.5million several years ago. I ask how she feels about that now. She chooses her words carefully.

“It’s just the way it is,” she begins. “I don’t think it’s fair. It’s a shame for women that inequality is unfair. It’s a man’s world.” She perks up again when we talk about Britain leading the charge for global creativity.

“Over the years, we’ve had all sorts of movements, from the sixties to punk. Now, it’s bland. We need to invest in creative education – it’s for the benefit of everyone. It makes money for the person and the UK.”

She stifles a yawn, so I finish the interview. She will be up until late into the night reviewing more photographic entries. After the exhibition is over, maybe she will take a small break.

“It would be great to just do straight portraits or scripted drama – you could half the workload,” she says. “But I still haven’t finished what I’m doing. There’s always another story, isn’t there?”