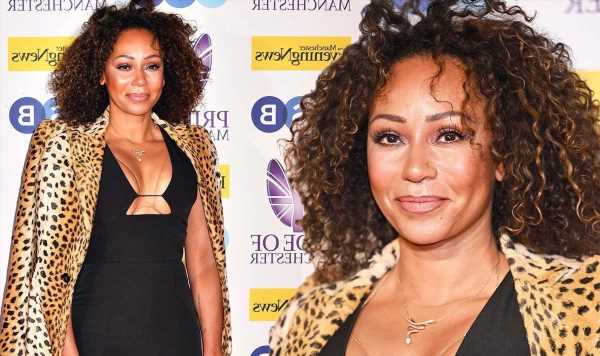 Mel B, 47, is rumoured to have got engaged earlier this week to her boyfriend, hairdresser Rory McPhee, 36. The Spice Girls star reportedly “burst into tears” when her beau popped the question with a £100,000 ring.

The proposal is said to have taken place on Wednesday, while the couple were away on a romantic getaway.

According to The Sun, Mel was “overwhelmed” by Rory getting down on one knee at the scenic country hotel Cliveden House in Berkshire.

A source told the publication Mel has finally started to “believe in love again” after Rory gained her trust.

They said: “Mel is so happy and this is such a big deal for her because she has been through such a lot.

“It has taken a huge amount for a man to get her to trust him and to believe in love again.

“Rory is from her home town Leeds, he’s known her for years.

“He’s the absolute opposite of so many of the guys she had relationships with.”

The insider added: “He is a really normal, down-to-earth guy, with good morals who has worked incredibly hard to build his own business and a family business.

According to the news outlet, Rory’s best friend is Mel’s cousin, Christian Cooke.

The former Spice Girl was previously married to her ex-husband of 10 years, Stephen Belafonte.

Mel B first found worldwide fame as a member of the girl group Spice Girls, before establishing herself as a television personality and talent-show judge.

She took part in the fifth season of the American dance competition series Dancing with the Stars and has also been a judge on reality shows, including America’s Got Talent.

But despite having a hugely successful career, Mel has also faced health woes, including mental health issues.

Back in 2019, Mel opened up about her health while appearing on Paul McKenna’s Positivity Podcast.

The singer revealed she had been diagnosed with ADHD, along with dyslexia, dyspraxia and anxiety.

Explaining how she deals with these conditions, she said: “I work out to help my mind. I do have ADHD, as well as dyslexia and dyspraxia.

“Exercise helps me meditate and get rid of my anxiety. It helps me focus on me, for that one hour.

“I do have mental illness, you have to be a little bit crazy to do what I do.”

She added: “I do suffer from anxiety, but I try not to get too stressed out about it.”