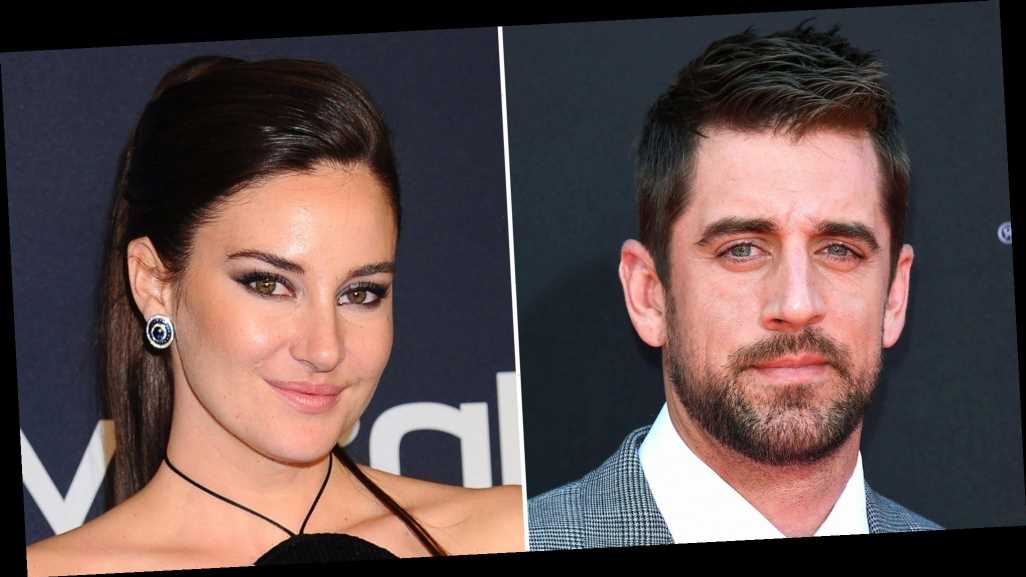 It’s official! Shailene Woodley confirmed that she is engaged to Aaron Rodgers three weeks after he surprised football fans by revealing he had a fiancée during a speech at the NFL Honors.

The Big Little Lies alum, 29, addressed her romance with the quarterback during the Monday, February 22, episode of The Tonight Show Starring Jimmy Fallon.

“So it’s kind of funny. Everybody right now is freaking out over it and we’re like, ‘Yeah, we’ve been engaged for a while,” Woodley told Jimmy Fallon on Monday’s episode. “He’s, first off, just a wonderful, incredible human being. But I never thought I’d be engaged with somebody who threw balls for a living. Like, I never thought as a little girl … ‘Yeah, when I grow up, I’m gonna marry someone who throws balls! Yeah!’ But he’s really just so good at it.”

The actress also confirmed that the twosome met during the coronavirus pandemic.

“When I first met him, I think my dog like pulled me aside and was like, ‘If you don’t date this dude, I will disown you as my mother, because the three feet that I run with you when you throw a ball is nothing compared to the marathon I’m able to run with him,’” she said, noting she’s never even been to a football game. “We met during this whacky, whacky time and all the stadiums were closed that he was playing in, so I have yet to go to a football game. I didn’t really grow up with sports, especially American sports. It was never really on my radar. When we met, also, I knew he was a football guy, but I didn’t know like what kind of a football guy he was. And I’m still constantly learning.”

Rodgers, 37, revealed on Saturday, February 6, that he is engaged but did not specify to whom. “2020 was definitely a crazy year filled with lots of change, growth, some amazing, memorable moments, 180 straight days of having my nose hair scraped, playing for very little fans or no stands the entire season,” he said during the NFL Honors awards in his acceptance speech for the 2020 AP Most Valuable Player. “I got engaged and I played some of the best football in my career.”

The Green Bay Packers quarterback then expressed his gratitude to his loved ones. “So I’d like to thank, first and foremost, my teammates for their support, their inspiration, protection, incredible play on the field. … Off the field I’ve got a great group of people that support me, so I’d like to thank my team,” he raved. After listing several more individuals, he gave a shout-out to “my fiancée.”

He concluded: “There’s so many more people I’m thankful for. Just encourage people to read books, to meditate, speak things to life, manifest the desires of your heart, question everything and spread love and positivity.”

The engagement news came days after Us Weekly confirmed Rodgers and Woodley’s relationship. “Aaron and Shailene are dating!” a source told Us. “They started off as friends, but things have turned romantic. The two are staying in contact while they are living away from each other. The relationship is long-distance for right now, but they are making it work.”

Surprise! Stars Who Got Secretly Married

The couple first sparked romance rumors in July 2020, although they kept things low profile for months.

Rodgers previously dated Danica Patrick for more than two years. Her rep told Us in July 2020 that the pair were “no longer together.”

The NFL star opened up about changes in his personal life in September 2020. “I have just a new and increased love of life and I have made decisions and changes and habits that put me in a lot better headspace,” he explained on The Pat McAfee Show. “There’s just a lot of things that have come together in my life over the last few months that have really been enjoyable and reminded me, given me perspective in life and in football to view things through the most positive lens I possibly can.”

For her part, Woodley confirmed her split from Ben Volavola in April 2020 after first being linked to the rugby player, 30, in 2017. She told Bustle at the time that the two “were very much on the road to marriage and children” but she realized she “was still at an age where I wasn’t able to fully commit.”