Selena Gomez bundles up in a yellow and orange look while starting to film scenes for her new show, Only Murders in the Building in New York City on Monday (December 7).

The 28-year-old actress wore a bright orange beanie on her head and furry vest as she walked down the street with headphones on her ears, as she kicked off filming for the day on the upcoming Hulu series.

Selena serves as an executive producer on the show as well, and it will also stars Steve Martin and Martin Short

The series “surrounds three strangers who share an obsession with true crime and suddenly find themselves wrapped up in one. When a murder occurs in their NYC apartment building, they are forced to work together to figure out what happened.”

That same day, Selena was seen wearing a red jumpsuit on the set with a neon green face mask, which is the same as the one Steve was wearing last week! 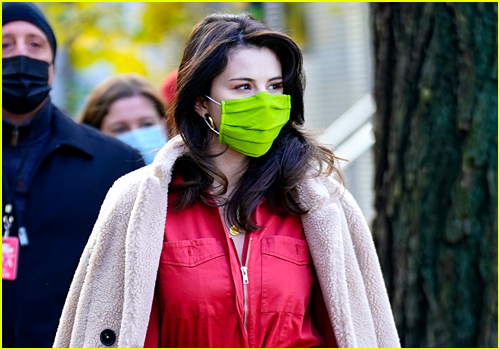