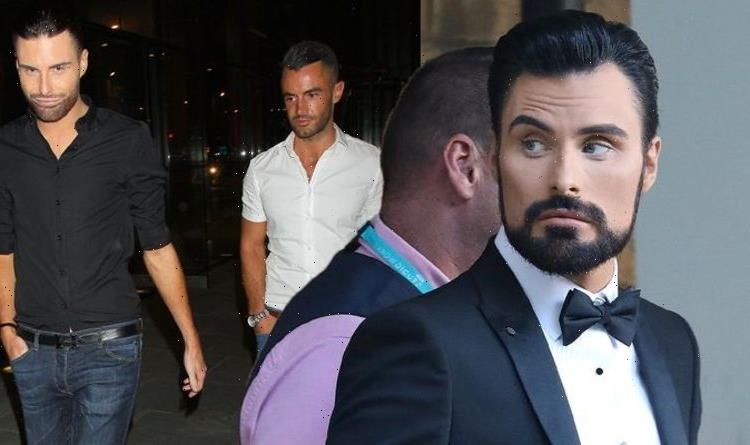 Rylan Clark-Neal is pranked on BBC Radio 1 in 2019

Rylan Clark-Neal left the Attitude Awards on Wednesday night accompanied by a male companion after joking about his desire to join dating app Grindr. The 32-year-old presenter, who recently split from his husband of six years Dan Neal, left The Roundhouse after the star-studded evening whilst linking arms with a pal.

In pictures obtained by MailOnline both men cut dapper figures for the evening, with Rylan sporting a white shirt, featuring a diagonal black stripe across the front, and black trousers.

The X Factor icon stepped up on The Roundhouse stage earlier in the evening to present the Icon Award to pop group Steps.

He appeared preoccupied with his phone before putting it away, telling the crowd: “Sorry guys I was a little bit distracted, I was trying to download Grindr it’s been 10 minutes!

“What a year, I’m genuinely thrilled to be here.”

During his speech about the 90s pop group, he gave a special mention to Claire Richards, who he said was like “a sister” to him.

“One of the members of this band is like a sister to me and for the past four months for probably the toughest time in my life, she’s supported me and without her, I don’t think I’d be here presenting this award,” he gushed.

Rylan stepped down from his BBC Radio 2 show for four months after splitting from former policeman Dan.

The star recently returned to work, after taking a break from the spotlight to process the end of his marriage to Dan.

On his first show back on BBC Radio 2 last month, Rylan thanked his fans for all their support through the tough times.

“It really is me. Welcome back to Rylan on Saturday,” he told listeners.

“You are listening to Rylan on Saturday and it is good to be back in the seat and a massive thank you to Vernon Kay, to Oti Mabuse and to Cat Deeley for keeping this seat and my little baby lovely and warm.

“When we’re allowed I’ll give you all a big cuddle. Thank you so so much.”

DONT MISS:
Angel Strawbridge opens up on being a ‘similar age’ to Dick’s children (PHOTOS)
‘Blessing in disguise’ Janette Manrara shares cryptic post (NEWS)
Piers Morgan details ‘awful memories’ from Have I Got News For You (LATEST)

“Secondly a massive thank you to you, the lovely listeners and thank you for all your lovely messages.”

Rylan confirmed his split from Dan back in June, when he admitted he was “trying to take each day at a time”.

“Following reports about Dan and I spending time apart, I feel I have to speak out – as the way it is being reported is unfair,” he said in a statement at the time.

“I have made a number of mistakes which I deeply regret and have inevitably led to the breakdown of our marriage.

“I am trying to take each day at a time and would like to thank you to everyone for their support and for respecting our privacy at this time.”

Rylan, who has been married to Dan since 2015, previously sparked concern as he suddenly pulled out of hosting the Eurovision Song Contest this year.

Meanwhile, the star said back in March that he was taking a break from the “sewer” of social media.

Speaking on the Sorted with the Dyers podcast, he said: “I love social media, social media is not only lucrative when it comes down to money, it’s brilliant for communication, there are so many plus sides to it.

“But I found in the last three weeks, me looking at my phone, looking at my feed, looking at what is trending more so and I’m just getting to that point where I’m thinking this is a f***ing sewer.”