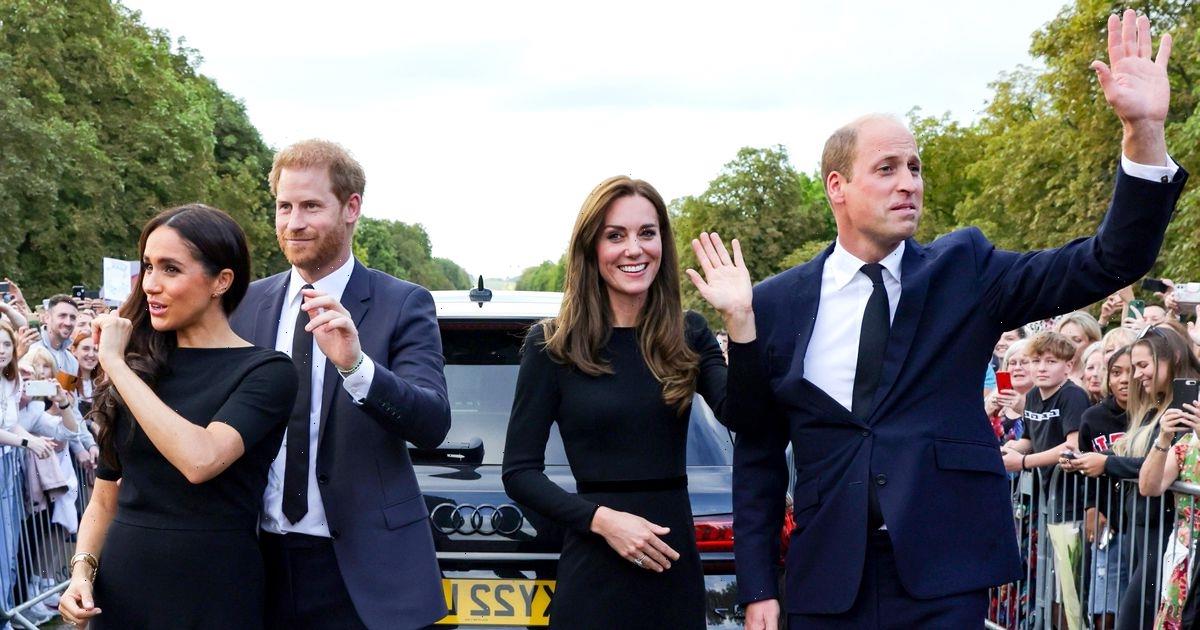 Royal fans were quick to react on Saturday as the "Fab Four" – Prince Harry, Meghan Markle, Prince William and Kate Middleton – reunited in public for the first time since 2020.

The Prince and Princess of Wales, both aged 40, and the Duke and Duchess of Sussex, 37 and 41, united for a surprise visit to inspect floral tributes outside Windsor Castle for the Queen on Saturday 10 September.

It has since emerged that the Prince of Wales "invited" the Sussexes to join him and the Princess of Wales in their afternoon walkabout at Windsor.

The group were dressed in all black as they walked along the gates of Windsor Castle after the Queen died aged 96 on the 8 of September.

Taking to Twitter, Royal fans were quick to react to the return of the "Fab Four" as they praised the group's reunion.

One person said: "Wonderful to see Prince William (& the Princess of Wales) with his brother again and also introducing his sister-in-law / including her. Love seeing the Fab Four together again – more please if possible."

Another follower said: "How wonderful to see the Fab Four in Windsor."

While a different account added: "Happy to see the Fab Four together."

The Duke and Duchess of Sussex held hands as they looked at the tributes, with Harry at one point affectionately putting his hand on Meghan’s back.

They were seen pointing at different tributes and discussing them as members of the crowd waved at them.

A crowd at Windsor Castle broke out into applause as the Prince and Princess of Wales and the Duke and Duchess of Sussex approached members of the public and spoke to them.

William was seen speaking intently to a member of the crowd, at one moment shaking a woman’s hand. Both William and Kate could be seen thanking members of the crowd too.

Kate crouched down at one moment and began speaking to a child who had started to cry. The child stopped crying when Kate approached her.

Meghan was also seen shaking the hands of several children and well-wishers at Windsor.

The Duke and Duchess were handed bunches of flowers by the crowd which they both accepted.

It is thought that this is the first time the Prince and Princess of Wales and the Duke and Duchess of Sussex have all been in public together since Commonwealth Day in 2020.

The group spent more than 40 minutes speaking to members of the public, where they received flowers, gifts and hugs from well-wishers.

The Prince and Princess of Wales and the Duke and Duchess of Sussex left in the same vehicle after finishing their walkabout outside Windsor Castle.

It comes as Prince William shared a heartfelt tribute to his late grandmother Queen Elizabeth II.

The Prince of Wales took to his official Instagram account to share his "sadness" and praise his "Grannie", who passed away on 8 September, branding her "an extraordinary leader".

While The Queen's funeral will take place on Monday 19 September at Westminster Abbey, it has been confirmed.