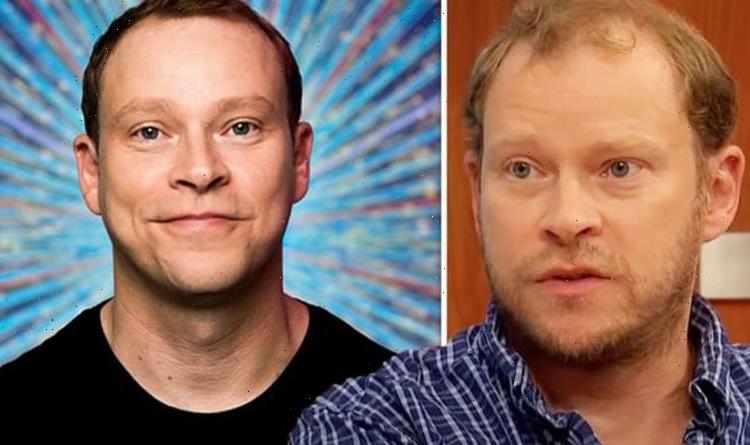 Peep Show star Robert Webb, 48, has cheekily stated Strictly Come Dancing is not “cool” after being confirmed as the second celebrity contestant to appear in the 2021 series. Speaking at the press launch, the comedian told how he believes that the programme is a more “sedate affair” compared to his previous dance experience, which saw him perform wearing only a black leotard and pair of leg warmers over a decade ago.

Cool isn’t the first word that springs to my head

Speaking about his upcoming stint in the popular BBC dance programme, Robert admitted that despite being thrilled to be part of the line-up, he doesn’t think of the show as “cool”.

He said: “I mean Strictly is many things but it’s not,” he faltered, before continuing, “cool isn’t the first word that springs to my head, it’s joyful and it’s engaging, but the usual kind of cool, it isn’t,” he clarified.

Addressing his previous dance experience, the actor reflected on how he starred in BBC’s Let’s Dance for Comic Relief over a decade ago.

Robert said: “I did enjoy Let’s Dance for Comic Relief.

“But that first performance, that live first heat, was the first time I got through the dance from start to finish without stopping and looking at the choreographer and not knowing what to do next.”

The actor went on to admit that he felt “terrified” before his performance, but hopes that he won’t feel like that fear as he takes to the Strictly dance floor with a partner.

Robert continued: “I was in all kinds of terror before that screen went up, but hopefully it won’t be like that this time.

“I think you get a little bit longer to rehearse and secondly, I’ve got a partner, so I think that won’t be quite as horrific and I won’t be so badly prepared.”

Robert only recently found out who his Strictly dance partner is, and yesterday told how he had his very first day of training.

Addressing his performance on the show, the comedian said that he expects to become “very competitive” if he makes it past the halfway mark.

He said while speaking to Express.co.uk and other publications: “I don’t think I’ll pick up moves any quicker or remember them any better than anybody else.

“I think when I know what I’m doing it’s going to be alright, but if I get more than half way through then I expect I’ll become very competitive,” he added.

Speaking about the daring outfits he’ll be taking to the dance floor in, Robert revealed that he’s not afraid to push the limits.

11 years ago, Robert put on an incredible show dancing to Flashdance… What a Feeling for Comic Relief, which saw him take first place.

Dressed in only a black leotard, Robert showcased his enviable dance moves in a black curly wig and a pair of leg warmers in an attempt to look like Jennifer Beals in the 1983 film.

Comparing the two BBC shows, the comedian branded Strictly a more “sedate” affair, but insisted that he was up for wearing any outfit “within the law of public decency”.

Speaking about Strictly, Robert said: “I don’t think that guys seem to get their legs out very often on this show, I think it’s a more sedate affair, we all tend to be quite well trousered.

“If it’s not going to upset the ladies and gentleman, I’m really up for more or less anything within the law about public decency,” he added.

Strictly Come Dancing starts this Saturday at 7.45pm on BBC One.