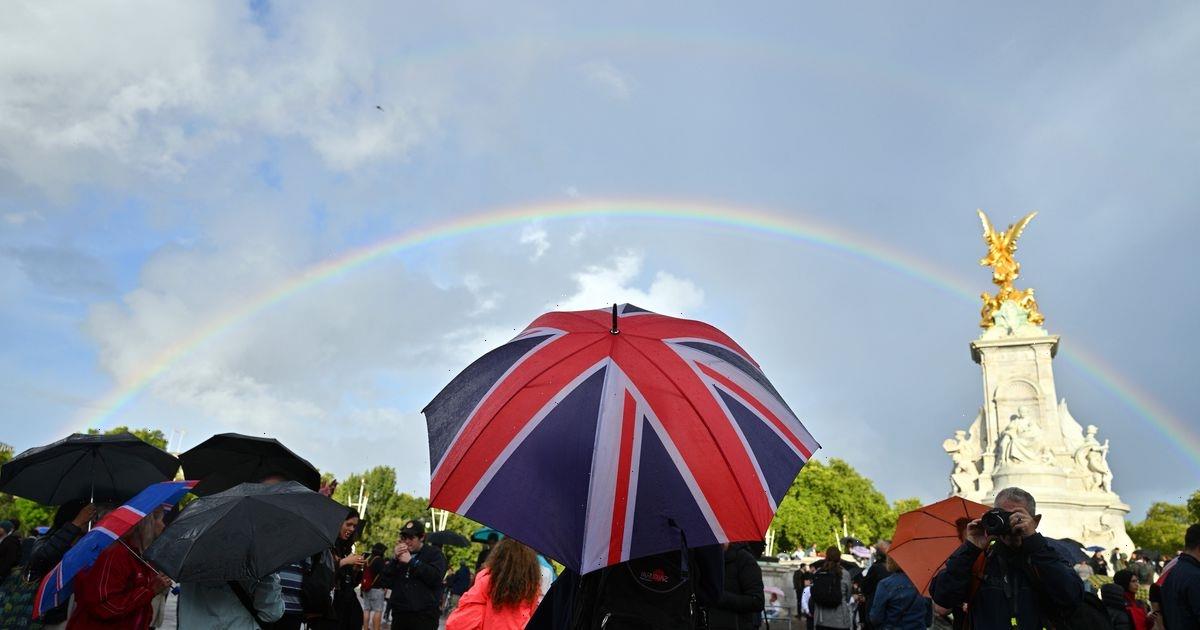 Buckingham Palace and Windsor Castle have both lowered the Union flag down to half mast following the heartbreaking death of Her Majesty Queen Elizabeth II.

The monarch died on Thursday 8 September at the age of 96 as a statement from the Royal Family read: "The Queen died peacefully at Balmoral this afternoon. The King and The Queen Consort will remain at Balmoral this evening and will return to London tomorrow."

Since then, King Charles III as well as Meghan Markle and Prince Harry have paid tributes in her honour, while the rest of the country have been mourning alongside them.

Thousands have gathered outside Buckingham Palace and Windsor Castle to see the Union flags lowered down to half mast in honour of the passing of the Queen.

An incredible rainbow was seen just behind the two flags, with many across social media seeing the poignant moment as a sign.

One person took to Twitter to share: "Fitting that as the flag is half mast for #QueenElizabeth a rainbow to heaven is guiding the #Queen to heaven".

While a third added: "The moment Queen Elizabeth II passed, a double rainbow pierced the rainy clouds. She truly left the world."

Many people have gathered in crowds to mourn the loss of the Queen, who reigned for 70 years.

Some even brought bouquets of flowers to place down at various locations as a means to show their sorrow and condolences for the Royal Family.

A sign was also placed by Buckingham Palace announcing the death of Her Majesty.

And the BT Tower paid tribute by sharing a black and white strap that read: "Her Majesty the Queen 1926-2022," alongside a photo outline of the Queen.

The Queen's coffin is set to lie in state to allow the public to pay their last respects. Lying in state is usually reserved for sovereigns, current or past queen consorts, and sometimes former prime ministers.

During the formal occasion, the closed coffin is placed on view in the vast, medieval Westminster Hall in the Palace of Westminster.

The historic spectacle is expected to attract hundreds of thousands of people.

The Queen’s death in Scotland means there could possibly be a second mini lying in state, most likely in St Giles’ Cathedral in Edinburgh, which would allow the public to honour the monarch.

Contingency plans put in place in case the Queen died during the pandemic are believed to have included ticketing of the main lying in state, possibly in timed slots – an option which could still be employed.

The Duke of Edinburgh Prince Philip, who died in April 2021, did not lie in state, which was in accordance with his wishes, but, at this point in the Covid-19 crisis, such mass gatherings were also against the law.

In the days leading up to the funeral, members of the public will file slowly past to pay their respects in sombre silence.