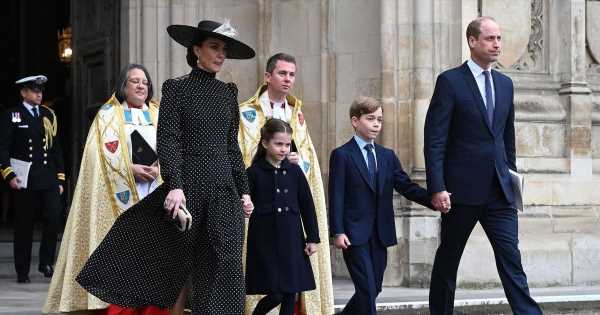 The eight year old Royal, who is next in line to the throne after his grandfather Prince Charles, 73, and dad William, 39, seemed to struggle with the pressure and eyes on him at the event as cameras showed the little boy looked worried.

But a body language expert has claimed that the Duke of Cambridge sensed his eldest son's anxiety and gave him some gentle reassurance during a conversation with a member of the military.

William had been holding his son's hand steadfastly, but when he greeted and spoke to the Navy man, George was left wondering how to engage and interact, which prompted an "awkward" moment for the young Royal.

Expert Nick Davies told how George was showing signs of slipping from confidence into anxiety and started licking his lips and fiddling with his jacket nervously.

The Duke apparently noticed his son had started to struggle and in response placed a hand on his shoulder protectively.

"He [George] takes a deep breath quickly, gulps and licks his dry lips which is caused by pre-emptive anxiety, but he maintains good eye contact and once he is spoken to by one of the clergymen he breaks into a broad smile showing his confidence," the expert continued.

“However, once his father talks to the Navy gentlemen with the gold braiding, George's mouth tightens to the left and he rubs the bottom of his jacket with his right fingers, showing he feels awkward and is seeking comfort.

Fellow body language expert Judi James agreed that George and Princess Charlotte, six, had coped remarkably well with such a big moment in their lives as Royals.

But while the children had likely had rehearsals ahead of the memorial service, William and Kate Middleton, the Duchess of Cambridge, 40, also showed off their impressive and supporting parenting.

“William’s hand barely left his son’s shoulder and he used several pat-rituals as a tie-sign to register encouragement and approval," Judi told OK!

"You could tell from the way George copied his father totally that there had been some rehearsals and training behind the scenes.

"They were appearing here as proud and loving parents, gently continuing George and Charlotte’s induction into formal royal life," the expert added.

For all the latest Royal news, sign up to our daily newsletter here.