Cardi B rocked a multicolored Emilio Pucci catsuit while apartment hunting with Offset for their expanding family.

A pregnant Cardi B rocked the ultimate ensemble while apartment hunting with husband Offset over the weekend. The rapper, 28, wore a multicolored Emilio Pucci catsuit in shades of blue, green, and purple while touring luxury waterfront properties for her expanding family in New Jersey with her rapper husband, 29, who gave her butt a little pat, as seen in photos HERE. 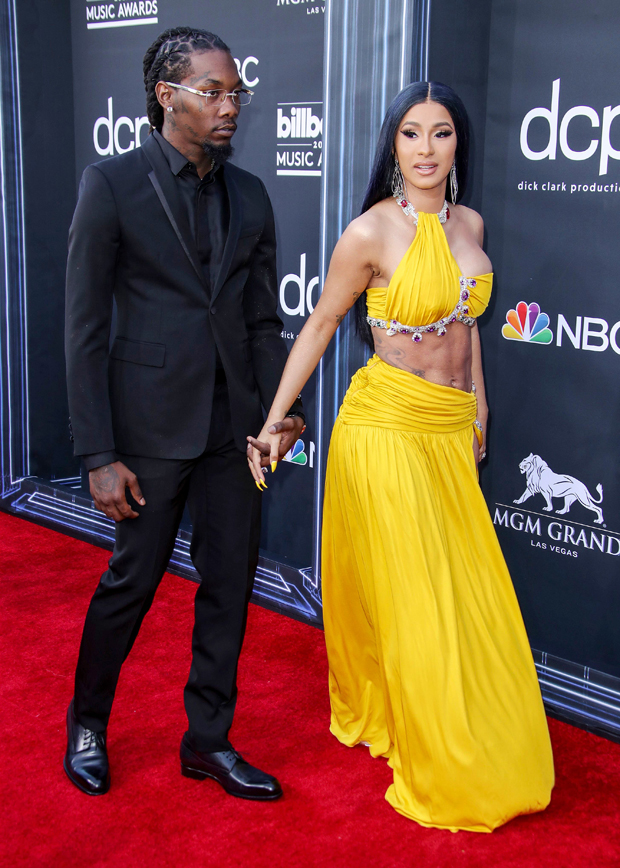 The Grammy winner similarly wore a bedazzled catsuit when she debuted her baby bump for baby number two at the BET Awards in June. The “WAP” rapper announced her second pregnancy when she emerged on stage for a performance of “Type Sh*t” — surprise baby bump in tow. Cardi and Offset, who wed in 2017, are already parents to daughter Kulture, 3.

Cardi announced Kulture’s pregnancy in the same surprise fashion: she debuted her baby bump back in 2018 on stage during her stint as musical guest on Saturday Night Live. Following the announcement of her second child, Cardi shared a series of maternity shoots with Offset and Kulture.

In one with Kulture rubbing her belly, Cardi reflected on the type of big sister her daughter would be. “I just know these two will love each other soo much and argue soo much since they’re 3 years apart…just like me and Henny,” the rapper wrote, referencing her sister Hennessy Carolina. “But one thing for sure is they’ll have each other’s back like no one else ever will.”

The house hunt comes after Cardi teamed up with Lizzo for the new track “Rumors,” which came out on August 13. The ballad owns up to rumors and features a Hercules goddess-inspired music video. Following the release of the new song and video, however, Lizzo became subjected to online abuse on Sunday and tearfully addressed it in an Instagram Live.

“It’s fatphobic, it’s racist, and it’s hurtful,” Lizzo said. “What I won’t accept is y’all doing this to Black women over and over and over again, especially us big Black girls. When we don’t fit into the box that you want to put us in, you just unleash hatred onto us. It’s not cool.” Shortly after, Cardi defended her collaborator on Twitter and slammed the haters as “nerds.”

“When you stand up for yourself they claim [you’re] problematic & sensitive,” Cardi wrote. “When you don’t they tear you apart until you crying like this. Whether you skinny, big, plastic, they going to always try to put their insecurities on you. Remember these are nerds looking at the popular table.”