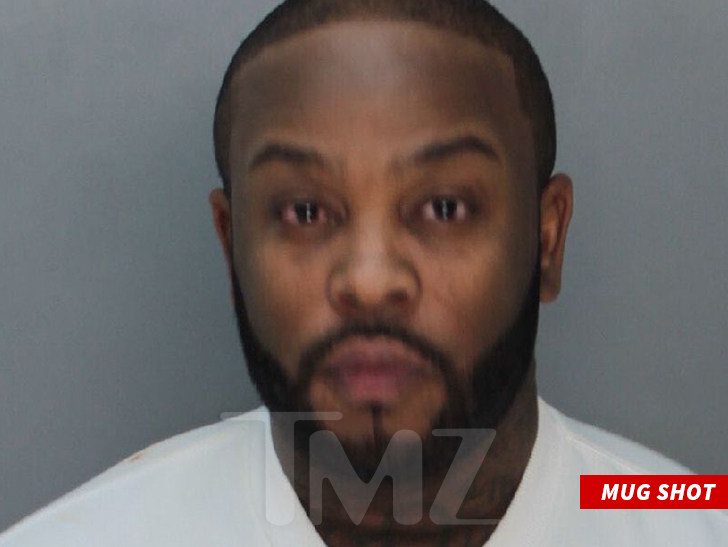 2:09 PM PT — According to the police report — obtained by TMZ — PP was spotted weaving in and out of traffic in an SUV at a speed estimated to be over 100 MPH. Cops say they pulled him over and ordered PP out of the vehicle and cuffed him … he then stated his name was Pleasure P from Pretty Ricky.

Cops say PP reeked like booze, and it was so bad, they had to roll down the windows of the police car to air it out. The report says the singer was given a breath test once back at the station — where he blew a .176 and then a .175 — more than twice the legal limit.

And, get this — cops say while he was getting booked, PP asked to call Shaq and the rapper Flo Rida — a request that was denied.

Pleasure P — a member of the R&B group Pretty Ricky – joked about telling the devil to go back to hell ’cause he had some birthday celebrating to do … and hours later he was busted for DUI.

Pleasure P, who turned 34, was busted in Miami Friday morning and booked for DUI, driving with a suspended license, reckless driving and resisting an officer. Pleasure P — who left the group in 2007 for a solo career — was released after posting bail.

It’s interesting … Pleasure P posted a video on Instagram to thank his more than 325k followers for the birthday wishes. He captioned it, “My birthday started off a little slow which is why I haven’t been posting the devil was trying to work, but I told his ass to go back to hell because I got some celebrating to do.”