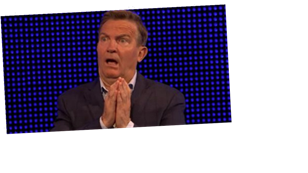 Bradley Walsh is best known for fronting The Chase but now that he won't be returning in the new spin off The Chase EXTRA, Phillip Schofield has been tipped as the one to take over from his presenting duties.

It has been predicted that this year could be Bradley’s final year hosting the gameshow with Chasers Mark Labbett, Shaun Wallace, Anne Hegerty, Paul Sinha, Jenny Ryan, and last year's newbie Darragh Ennis.

And, bookies popular betting website Paddy Power have rated This Morning’s Phillip Schofield as the 4/1 favourite to replace Bradley, who cut his head open in a horrific injury during filming with son Barney, as they say “The Chase is over” for Bradley at 10/11.

A spokesman for Paddy Power said: “Bradley Walsh is such a major part of The Chase that it’s hard to imagine the show without him.

“I mean, who else is going to break down laughing at questions including names like Fanny Chmelar and Dick Tingler?”

They added: “With ITV bosses making moves to run a spin-off show without Brad, it seems that it’s not just the contestants who are now ‘one step closer to home.’”

While the Dancing On Ice host, who recently revealed his body transformation in lockdown, is the favourite to replace Bradley, Dermot O'Leary and Shane Ritchie are also in the running to play quizmaster on the ITV show.

When looking at the Chasers themselves, Anne Hegarty aka The Governess is tipped as the first quizzing genius to depart the show for good after 11 years at 5/6.

It comes after the news of the new spin off series, The Chase EXTRA, was announced, which will give viewers the chance to get to know the chasers a little bit better as they set fans a quiz of their own.

Each quizzer will have their own episode where they will also share jokes and their expert tips.

While Phillip is well known for presenting Dancing On Ice with his on-screen partner Holly Willoughby, a source close to the blonde beauty disclosed that the hosting duo are "desperately worried" this series is "jinxed" with all the injuries and line-up changes so far.

"Holly and Phil are desperately worried but they have to keep going,” the source told OK!.

They added: "Holly and Phil are dreading the next injury. They’re dropping like flies!”