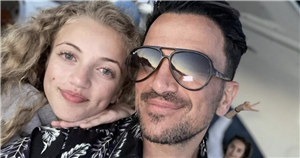 Peter Andre took to Instagram on Wednesday to wish his eldest daughter, Princess, a happy 15th birthday but hilariously warned her: "NO, you can't go on Love Island".

Peter, 49, shares Princess, who he affectionately calls "Bista", and her brother Junior, 17, with his ex-wife Katie Price, who he met on the 2004 series of ITV's I'm a Celebrity…Get Me Out of Here.

The star, who is now married to Emily Andre, 32, with whom he shares two children, Amelia and Theo, reposted a video that Princess had posted about her 15th birthday.

As he wished his eldest daughter a happy birthday, he described her as "kind, loving, moody and caring".

He wrote: "Happy 15th birthday to my kind, loving, moody and caring daughter. You bring so much life to our home. We all love you so much. You are beautiful inside and out just the way you are and never forget that. Happy birthday and NO, you can’t go on Love Island. Love dad."

Fred Sirieix, who is best known for appearing on Channel 4's First Dates, touched on Peter's comment about Love Island, commenting with a number of laughing emojis and writing: "The Love Island bit!"

Princess herself commented on her dad's post, writing: "Love you" with a red heart emoji.

Princess has previously expressed her wish to go on the hit ITV2 dating show Love Island, as Peter revealed in his column for new! Magazine: "Princess has said she wants to do it [Love Island] but I still haven’t changed my mind about that."

He continued: "Presenting it? Yes. A contestant? Not so sure!

"She said to me, 'Would you ever let me go on Love Island?'"

"I said to her, 'When they start doing Love Island based on priests and nuns and they’re having their sermons on Sundays you can go on Love Island but until then no chance'."

He even previously revealed that he wouldn't let the then 14 year old even watch Love Island, telling Women magazine: "I don’t allow Princess to watch the show, but she’s just turned 14 so maybe I’ll change my mind".

Princess isn't the only Andre offspring to celebrate their birthdays recently, as her older brother Junior just turned 17.

To celebrate his coming-of-age when he can learn to drive a car, Peter treated his eldest child to an Audi A1.