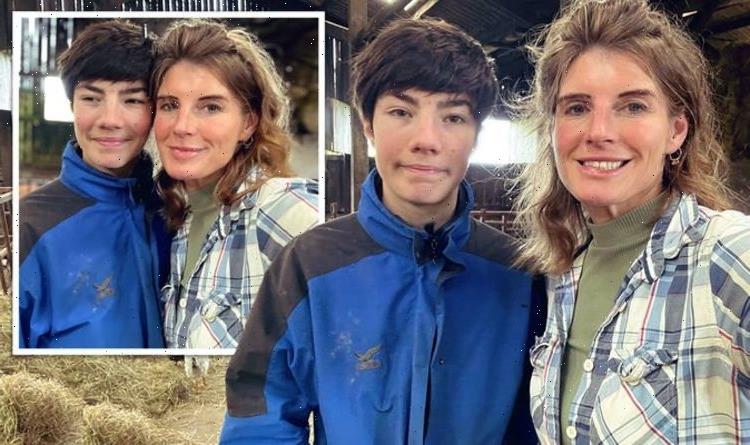 Yorkshire Shepherdess Amanda Owen took to social media last night after persuading her “shy” son Miles, 14, to pose for a picture with her. The mum-of-nine then shared the “super rare” snap online, much to the delight of her followers.

Amanda’s teenage son is an aspiring farmer and looks after his own flock of sheep while tending to the chickens.

He is not seen on camera as often as some of his other siblings.

In the photo, the youngster, who she shares with husband Clive, sported a crop of dark hair.

He wore a blue outdoor coat as he got to work in the cow shed, while his famous mum could be seen in a checkered shirt.

“Up’t cow shed when I catch a super rare sighting of the shy one, Miles,” she wrote on Instagram, in view of her 405,000 followers.

“OMG!! He does exist! (Horton Hears a Who reference),” Twitter user Charles13497071 remarked in the comments section of the post.

“LOL Can’t say as I blame him much, trying for some privacy. But I am sure he has more than a few fans glad to see him,”(sic) the message continued.

“Ahh, my favourite with his reserve and shy smile. I love the way Clive calls him Milie sometimes,”(sic) user JulieHu49007983 added.

“Miles is so handsome he could model I’m surprised he’s not already been snapped up,” Instagram user farmhouseinteriors_ chipped in.

“Someone get Miles (and Reuben) a modelling contract! They’re all gorgeous kids. What a lovely family!” phi_phi543 added, sharing a similar thought.

Over the weekend, Amanda posted a picture of her daughter Nancy looking a little fed up ahead of a family roast dinner.

“Nancy has been super patient over the last eighteen months whilst I’ve been writing and testing recipes for a new book!” the shepherdess told fans.

Her new release, Celebrating the Seasons with The Yorkshire Shepherdess, features “farming, family and delicious recipes to share”.

The Channel 5 star offers tips and meal ideas which she has learnt over the years, while feeding her family of 11.

During an appearance on BBC Radio Two this morning, Amanda told host Gary Davis, who is standing in for Zoe Ball, that she often gets her children involved in the cooking.

However, she did point out that it was more of a necessity rather than a learning experience as there is so much work to be done on the farm.

On getting her kids to cook, she said: “People say, it must be that you’re a great parent, No. It’s that I’m a distracted parent with a thousand, million other things to do.

“So therefore I’m handing over the reins to them. So the recipes are all things that they are quite adept at.”