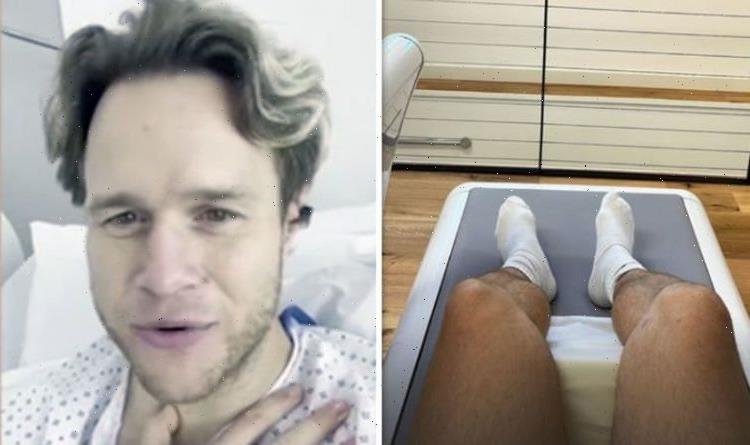 Olly Murs, 37, suffered a painful injury during the summer when a bone fragment lodged itself in the back of his knee mid-performance, leaving him unable to walk properly. The star is out the other side of surgery but admitted his leg is “still not great” as he underwent rehabilitation today.

Today he gave an update while having treatment as he shared a photo of himself lying down on a bed during therapy.

The popstar typed: “Getting some leg therapy in today! Much needed! Still not great, so hoping this helps!”

After his injury, Olly took some time to recover at home before getting right back out performing again.

He posted a graphic picture on social media at the time of the two fragments of bone that were removed during the operation.

He held up the gnarly, bloodied bits inside a tube for a photo that he shared on his Instagram Stories.

“Picture of the bones lodged in my knee!” he wrote.

“What are the chances?” he asked.

The Heart Skips A Beat singer also posted a video of his bandaged and swollen leg which he had propped up on a chair.

He also showed off the equipment he is using to help heal his knee so he can get back on his feet in time to perform again, saying: “These are game-changers, honestly so glad I’ve got this. Love it.”

Speaking from his hospital bed after his injury, Olly shared: “Basically, for some of you that came to the Newmarket gig on Friday, thank you firstly for all your kind messages and support and just checking I was okay.

“It’s been a mad 72 hours since the gig, getting to this point.

“Basically after my second song a fragment of bone that was in my knee, after I jumped, managed to lodge itself on the back of my knee which basically shut my leg down, and during the gig, I was just limping the whole time. Couldn’t believe it.

“I can’t cancel these gigs for you guys,” he went on.

“it was such an amazing vibe on Friday at Newmarket, so I’ll give my absolute everything next week for you all.

“It’s been a mad 72 hours because I honestly thought the worst.

“I thought I might have done my knee again, I thought I’d ruptured my ACL to be honest, so this is great news.

“It really is positive.”