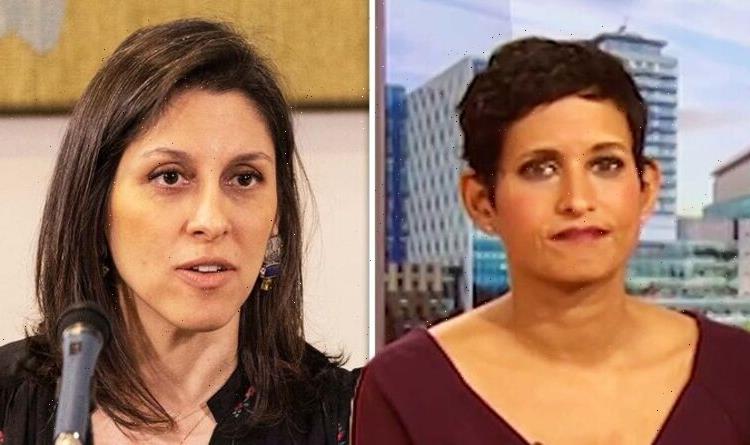 Nazanin Zaghari-Ratcliffe says she is 'very grateful' to be home

Speaking at a press conference on Monday, Nazanin thanked those who helped secure her release but criticised the Foreign Office for taking too long.

The mother-of-one said: “I have seen five foreign secretaries change over the course of six years, that is unprecedented.

“I was told many times, ‘We’re going to get you home’, and that never really happened.

“How many foreign secretaries does it take to get someone home? Five. What happened now should have happened six years ago.”

Following the press conference, “ungrateful cow” trended on Twitter as cruel users thought Nazanin, whose daughter was one when she was detained, should have shown more gratitude.

Naga, who has been following coverage of Nazanin’s release, shared her disbelief that the phrase was being used.

The presenter posted a screenshot of her trending page, which had “#ungratefulcow at the top, to her 267,000 followers.

More than a hundred users swiftly took to the comments, echoing Naga’s astonishment.

Katie said: “My god this makes me [angry emoji]. This is exactly why I watched the whole one hour interview. Nazanin, what a woman after all she has been through, I thought she was so strong and brave.”

Faye added: “So depressing, stupidly took a peek at the tweets with this hashtag and quickly wish I hadn’t.”

While Desmond wrote: “Absolutely revolted at the hostility she is receiving. She should have been free six years and five foreign secretaries ago.”

A whole host of notable names took to social media to shut down Nazanin’s critics, including former foreign secretary Jeremy Hunt, who held the role from 2018 to 2019.

He tweeted this morning: “Those criticising Nazanin have got it so wrong. She doesn’t owe us gratitude: we owe her an explanation.

“I tried my best — as did other foreign secretaries.

“But if trying our best took six years then we must be honest and say the problem should have been solved earlier. Ministerial turnover may have been a factor.”

Good Morning Britain presenter Adil Ray also shared his thoughts, saying: “Nazanin: ‘I am very grateful to whoever has been involved in getting us home. From politicians, media members..’ She then thanked her family, friends, medical and legal team and fellow prisoners.

“Then asked for more to be done for those still imprisoned. But sure, she’s ungrateful.”

Comedian Shappi Khorsandi commented: “Power to you Nazanin…you are absolutely right…this should have and could have happened 6 years ago.”