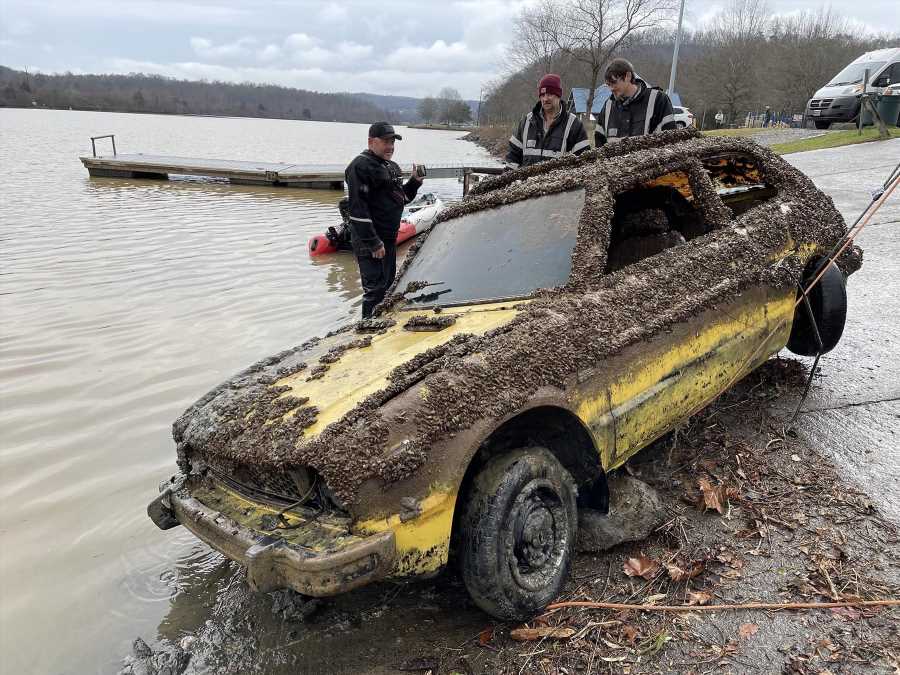 It’s a raw February morning in Oak Ridge, Tennessee, and YouTuber Jeremy Sides is preparing to extract a Honda CVCC hatchback from Melton Hill Lake. He’s here with fellow video creator Adam Brown, who will soon gear up in his scuba suit. “We should have no issues, it’s not that heavy of a vehicle,” Brown says, holding his camera in selfie mode. “We’re not going to have a problem with the car, we’re gonna have a problem with the conditions,” Sides quips, eyeing the water. “There’s no visibility. It looks like chocolate skim milk.”

They measure out rope and tie it to an orange buoy to mark the car. They inflate the sides of a 14-foot motorized raft and lay two metal seats across it, wedging a suitcase containing a sonar system into the bottom, and call a local towing company to let it know they’ll need its help again. But the pair are not just good Samaritans, dredging leaching metal from a public waterway. Rather, Sides and Brown are members of a growing YouTube community that specializes in finding missing cars — and, sometimes, missing persons — underwater. Populated by gearheads who are drawn to solving puzzles using high-tech tools and machinery (“man toys,” as Sides calls them), the community has found an untapped market: Not only are there thousands of missing-persons cases cataloged on databases like the Charley Project and NamUs, there’s also an audience eager to watch.

The car they’re working on this chilly day in Oak Ridge doesn’t contain any remains, but other searches in the area have turned up missing persons. In late 2021, Sides recovered the bodies of Erin Foster and Jeremy Bechtel while searching waterways in nearby Sparta. The two teenagers had last been seen leaving Foster’s home in 2000 in her 1988 Grand Am. In underwater footage that’s been viewed 5.1 million times, Sides follows a rope to the bottom of the Calfkiller River. The boxy shape of a vehicle looms out of the murky greenness. The windows are rolled up and covered in brown vegetation. Sides swims to the back of the wreck and wipes off the license plate, reading its number through his breathing apparatus: “It’s them.”

Sides, 42, got his start on YouTube with a metal detector. He’d roam through parks or explore the ruins of Civil War-era buildings near his home in Acworth, Georgia, finding treasures like old coins, tools, and glass jars. He got scuba-certified and made the transition to water, where he started recovering everything from 19th-century dentures to antique bombs and urns. “Urns are tough,” he says. “There was one urn that had a hole in the bottom of it. I picked it up, not exactly knowing what I had, and dumped all the remains on myself. I was like, ‘Oh God.’ ”

Sides went on his first missing-persons search in January 2021, with a group of divers from the YouTube channel Adventures With Purpose, based in Bend, Oregon. By that point, AWP had a pretty good track record: In May 2020, members of the channel, then known for environmental cleanup, had unexpectedly stumbled upon the remains of Timothy Robinson. Until AWP pulled his Mazda from the Willamette River during a livestream, Robinson, 56, had been missing since 2008. “We didn’t know until we got the car up that there were human remains,” says Doug Bishop, AWP’s lead diver. They cut the stream and later uploaded an edited version. “His family figured that he went off to Europe. His brother just never knew what happened to him, and the entire time he was underwater right outside of Portland.”

In January 2021, AWP invited other divers to join them in Nashville to search for Bill Simmons, 57, who had been missing for six months. That was when Sides learned to dredge out a car. He didn’t find Simmons that day, but the team was successful later in the trip, and Sides was hooked on searching for missing persons. “It just felt like I’d like to have more of a reason behind what I’m doing instead of just entertainment value,” says Sides. “It was like I could help out.”

That approach resonates with viewers, too. Once AWP found Robinson, the channel changed. “Viewers started sending in cold cases of their friends or family members that are missing with a vehicle,” Bishop says. Since 2020, AWP claims it has recovered the remains of 20 missing people.

When Sides pivoted from treasure hunting to searching for missing persons, he saw his views spike. In mid-2021, he gave up his day job as a mobile wheel repairman and went full-time into YouTube, supplementing his ad revenue with merchandise sales, donations, and paid subscriptions. When he found Foster and Bechtel in late 2021, he says his followers tripled. (He now has about 360,000.) His audience has changed, too. Whereas it was once fellow divers and treasure hunters, most people today come for updates or breakthroughs on cases. “The missing-persons community watching these videos are super supportive,” he says.

Divers like Sides take their roles as amateur investigators seriously. If Sides finds a car belonging to a missing person, he says, he calls the authorities instead of a tow truck, and he gets out of their way when they arrive. “Police will take over, and we become spectators,” he says. His interactions with law enforcement have been mainly positive so far, though according to other divers who spoke with Rolling Stone, encounters can be rocky. In one instance in 2020, AWP was waiting with the family of missing 17-year-old Nicholas Allen when the cops arrived to pull out the teen’s car. The cops can be heard on the AWP video acting dismissively toward the family, saying there’s “no guarantee” their child’s body was in there. “No, but at least it’s my car, and I asked you guys — I begged you guys to check,” the mother says. Allen’s body was recovered, and the sheriff’s office later issued an apology for acting insensitively toward the family.

Steve DuBois, a retired cop who is now the executive director of Season of Justice, a nonprofit that helps solve cold cases, thinks YouTube scuba sleuths provide a valuable resource in missing-persons searches. “Some of my brothers and sisters in blue might disagree with me, but as long as the group is careful about [alerting law enforcement] once they make their discovery, and they receive permission to be on private land, I don’t see a negative to it.” If a scuba diver solves a missing–persons case, the way DuBois sees it, that’s one less investigation police departments need to pay for.

Daylight is fading and freezing rain is falling on Melton Hill Lake as Sides and Brown talk with the tow-truck operators about making one last attempt. Despite their initial hopes that this would be an easy recovery, they’ve been at it for close to five hours. The car is hung up on a submerged stump. Sides looks exhausted, while Brown wants to make one more dive to attach a lift bag to the car, a huge balloon that should float it to the surface. “I don’t wanna leave without a car,” he shouts over the sound of the idling truck.

He and Sides haul a giant orange air bag, roughly six feet across, onto the raft, and Sides ferries Brown out to the buoy. Brown swims down and connects the bag to the car, and Sides inflates it via a motorized pump. As Sides hauls Brown back to shore, the tow truck starts pulling. By now a crowd of about five cars has gathered to watch. Brown and Sides stand on the boat ramp, in reverence, each training their phone cameras on the advancing prize. Soon, the little yellow hatchback will be dragged ashore, water cascading from its gaping windows, zebra mussels coating its battered exterior as its rims grind across the concrete. But for now, it’s sailing gracefully closer. Dustin Miles, the senior rigger for Quality Towing, has worked with Sides on four recent car recoveries and is as invested as the divers in its excavation. “As soon as we’re hooked to it, we get heartbroken if we leave empty-handed,” he says. “It’s the thrill of seeing it crest up through the water and knowing you’ve got it.”