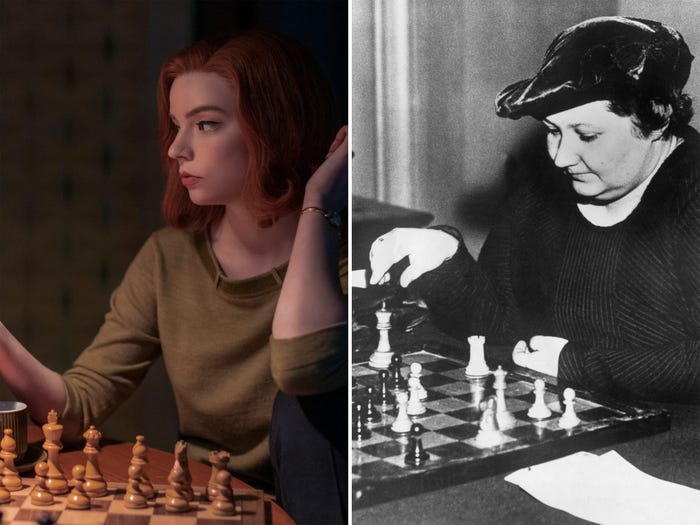 Netflix's hit "The Queen's Gambit" tells the story of Beth Harmon, an orphaned chess prodigy in the US in the 1960s.

Harmon's skill alone would have made her a noteworthy chess player, but her ability to break gender norms in a male-dominated game made her achievements even more significant to some characters early on in the show, a point that bewildered Harmon.

While Harmon is a fictional character, a female chess prodigy who was instrumental in breaking the gender norms of the game made her mark more than three decades before the TV show takes place, according to a biography of her life by Robert Tanner.

Vera Menchik, dubbed the "real-life Beth Harmon" by Chess.com, was a UK-based chess player in the early 20th century who became the first Women's World Chess Champion in 1927.

She went on to become the first woman to play in top-level men's tournaments, Chess.com reports.

She was born in Moscow, Russia, in 1906 to Author Wellington, a cotton manufacturer and estate manager for Russian nobles, and Marie Illingworth, a governess to Russian nobles, Tanner wrote.

When Menchik was 9 years old, her father began teaching her chess, The Washington Post reports. In 1921, she moved to England with her mother and sister, joining the Hasting Chess Club two years later, according to Tanner's biography.

Like Harmon's character, Menchik had a tough upbringing. She grew up amid the 1917 Russian revolution before her parents divorced and she and her sister moved with their mother. According to Chess.com, Menchik had trouble fitting in all her life.

One of the reasons she stuck with the sport was that she didn't speak English well at the time, and it was a quiet game, Tanner wrote.

Menchik represented Hastings and Sussex County in tournaments throughout the 1920s, working with coaches and building her skills as a chess player. She was the first woman to compete in male tournaments, The Washington Post reported.

In 1926 and 1927, Menchik won the first-ever London Girls' Championships. Also in 1927, she won the Women's World Chess Championship.

In 1928, Menchik made history again as the first woman to play at the master level when she participated in the Scarborough tournament, per Tanner's biography.

A year later, Menchik was the first woman to compete in a global grandmaster tournament.

While playing chess, Menchik was known to be quiet and still, with her hands folded, according to Tanner's biography. Some who watched her play described her style as "dull."

Meanwhile, Harmon's character was known for her aggressive style in the game, according to an article on Chess.com. Unlike Menchik, she often sacrificed pieces to win.

Unlike Harmon's character, who was obsessed with the game, Menchik said she did not live and dream chess. "That would be too fixed," she told Sussex Daily News, per Tanner's biography. "It's nice to turn to tennis, and I spend a lot of time modeling clay."

Sometimes Menchik's social life interfered with her performance in important competitions like the 1935 Moscow Tournament, where she spent much of her time sight-seeing the city of her youth, Tanner wrote. Some say the distractions cost her the tournament. Harmon, too, lost a major tournament in Paris after her personal life — specifically a drunken evening — interfered with her performance the next day.

In 1937, Menchik married Henry Stevenson, who was chronically ill, Tanner wrote. Menchik withdrew from her spot to play in Hastings in 1937 and 1938 to care for her husband. Stevenson died of a heart attack in 1943.

Menchik continued to play chess into the '40s and beat grandmaster Jacques Mieses, according to Tanner's biography. She was the first woman to face him.

Menchik died tragically in World War II when Nazis bombed her home in 1944, along with her mother and sister, per The Washington Post. She was mid-tournament, and she was winning.

In 2011, Menchik was the 16th person and first woman to be inducted to the World Chess Hall of Fame in St. Louis, Missouri.

"I love the fact that once Beth started to have results, and once it became clear that she had great ability, there was not a lot of 'I don't think she can be any good because she's a girl,'" he said.

But Carlsen also warned that chess still has a culture of sexism and suggested altering the format of chess tournaments to make them more gender-equal, Bostock reported.

"In general, chess societies have not been very kind to women and girls over the years," he said. "Certainly there needs to be a bit of a change of culture."