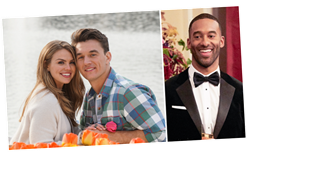 Hannah Brown and Tyler Cameron are just friends for now, but that hasn’t stopped fans from wishing they’d get back together. In an interview with ET’s Lauren Zima on Monday, Matt James opened up about how the pair prepared him for his upcoming season of The Bachelor — and reacted to the possibility of Hannah and Tyler being a couple again.

“You gotta ask them about that!” Matt said. “I can’t speculate on that.”

In an October YouTube video, Hannah and Tyler reunited to talk about all that went down when they quarantined earlier this year, with Tyler revealing they’re now “cool” after ending their time together on sour terms.

Regardless of what the future holds for Hannah and Tyler romantically, Matt is a big fan of them both. He initially wasn’t Team Hannah when she asked Tyler out for a drink on her Bachelorette finale following her failed engagement to Jed Wyatt, but when Tyler and Hannah reconnected at the start of the pandemic, Matt got on board.

In fact, the 29-year-old said Hannah “especially” helped him as he went from Bachelor Nation newbie to the franchise’s next lead. Matt was previously announced as a contestant on Clare Crawley’s season of The Bachelorette in March, but was announced in June to be the next Bachelor.

“Man, they were huge,” he said of Hannah and Tyler’s roles in preparing him for the gig. “Especially Hannah, that relationship that we formed during quarantine, she was awesome.”

“She just told me to be myself, and the same advice that Rachel [Lindsay] offered, be myself,” Matt continued. “It sounds simple, but when you’re in that moment, it’s easy to get caught up in the moment, but I continued to do things that grounded me, which was exercise, eat healthy, pray. And I got through it.”

Watching Tyler on Hannah’s season also helped. “I see Tyler a certain way, so when I watched it I didn’t want my view of him to be distorted. But that wasn’t the case, and I’m hoping that’s not the case for me either,” he shared.

As for whether Tyler or Hannah make an appearance on Matt’s season, he said he “wouldn’t be surprised.” Regardless, it sounds like fans are in for an exciting season.

“I don’t want to put a lot of expectations on it, but I think it’s a great start to the year,” Matt teased.

The Bachelor airs Mondays at 8 p.m. ET/PT on ABC. See more in the video below.