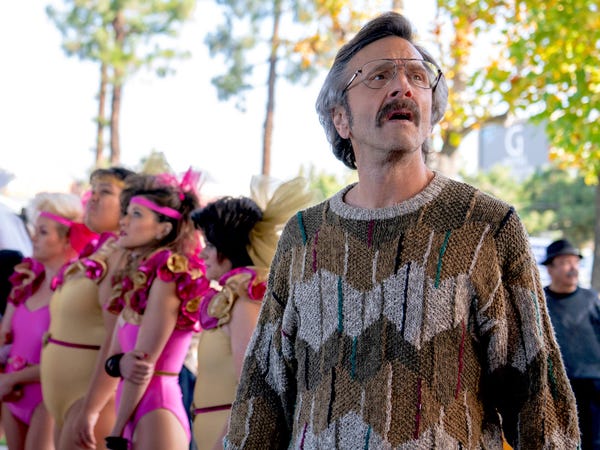 On Monday, fans of Netflix's "GLOW" were devastated to learn the series had been canceled. Last year, Netflix announced "GLOW" would return for a fourth and final season, and production was already underway in March. But then the COVID-19 pandemic caused the shutdown of their film sets, and now Netflix had reversed its decision to continue the series.

Comedian and podcast host Marc Maron, one of the show's stars, went live on his Instagram page Tuesday morning. During a thirty-minute video, he touched upon the news of "GLOW's" cancellation, and said he was pitching the idea of a two-hour "GLOW" movie as a way to properly end the series.

"Let us wrap it up in a two-hour Netflix movie," Maron said. "They had the whole season laid out. We know where [the story's going]. Why don't you give the showrunners and the writers and the cast an opportunity to finish the story in a movie. Right?"

The idea has now spread across social media, picking up support from fans and other cast members, many of whom say they wouldn't mind waiting multiple years if it meant getting closure on the series.

Representatives for Netflix, Maron, and the "GLOW" showrunners Liz Flahive and Carly Mensch did not immediately respond to Insider's request for comment.

Maron said in his Instagram live video that the cancellation of 'GLOW' was likely related to Netflix's leadership changes, financial considerations, and COVID-19

The "GLOW" sets include two soundstages and an office space, all of which were being leased throughout the COVID-19 shutdowns. Maron says he was told that part of the reason "GLOW" had been canceled was due to the financial costs of keeping those sets live for months on end.

Maron also brought up the recent change-up among Netflix executives. Last month, Hollywood insiders were surprised by the news that Cindy Holland, the vice president of original content at Netflix, was leaving the company. Holland had worked at Netflix for 18 years, and Maron described her as the "champion" of "GLOW." He believes one of the reasons their show was canceled has to do with Holland's departure from the company.

"I don't know what happened there," Maron said, referring to Holland's ouster. "So I can only assume it has something to do with that."

In addition to Holland's departure and the financial concerns, Maron brought up the difficulties they would have faced while trying to film "GLOW" amid the continuing COVID-19 pandemic.

"We're lucky that we are in this business and it's a gift, but it does not sound like fun to be on a set right now," Maron said. "And judging from 'SNL' last week, it does not look fun. I could tell three out of the however many performers on 'SNL' did not look comfortable. It's a shame."

Maron's Instagram video had just under 1,000 live viewers, but later a fan uploaded it to Twitter and started the hashtag #SaveGlow

"But I think what they should do, and I'm pitching this — if you'd like to get involved, all 992 of you, feel free to tweet at Netflix you're upset about 'GLOW,'" Maron said, addressing the people watching his live video. "I think what they should is […] let us make a movie. Right? Let us wrap it up in a two-hour Netflix movie."

He said the writing team and showrunners Liz Flahive and Carly Mensch had the full fourth season planned out, so the cast knows the general trajectory for their characters' final storylines.

"Why don't you give the showrunners and the writers and the cast an opportunity to finish the story in a movie?" Maron posited.

A fan recorded that segment of Maron's live video, uploaded it to Twitter, tagged the official "GLOW" account, and added the caption "YESS #saveglow." Maron's costars began retweeting the video.

Britney Young tagged the official Netflix account, asking the company to "listen to [Marc Maron] and the FANS who are willing to wait for another season or movie, so we can finish our story!!"

Kate Nash, another "GLOW" star, said she agreed with Maron and asked fans to retweet the video.

Britt Baron, who stars opposite Maron in the show as his character's daughter, Justine, also joined the rallying cry. "We would love the chance to finish our story," Baron wrote.

Before Maron's suggestion of a movie-finale started gaining traction, fans of "GLOW" had been tweeting about how they'd rather wait a few years for the final season than never get a proper conclusion to the series.

Insider's own entertainment correspondent Kirsten Acuna tweeted that "we all would have waited [two, three] years for a final season of #GLOW."

As of Tuesday evening, Maron's original Instagram video had over 20,000 views, while the Twitter version has more than 110,000.

In 2017, Netflix canceled the sci-fi series "Sense8," much to the dismay of fans. The second season had ended on a cliffhanger, and soon a social media campaign to save the series was started. Within weeks, Netflix announced a two-hour special "Sense8" series finale would premiere in 2018.

"The passionate letters, the petitions, the collective voice that rose up like the fist of Sun to fight for this show was beyond what anyone was expecting," the series cocreator Lana Wachowski wrote in a statement.

Fans of other canceled Netflix shows have tried similar renewal campaigns, with little success. Last summer, people protested outside of Netflix's Los Angeles headquarters to try and save the drama series "The OA" from its fate. One woman even went on a hunger strike.

But "The OA" has remained canceled, just like 46 other Netflix original series. Fans of "GLOW" will need to wait and see if their efforts are heard by the streaming service.