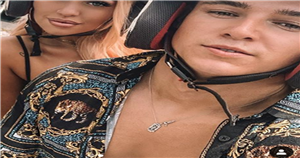 Made In Chelsea star Sam Prince has recently revealed his turbulent route to fame on the show.

Speaking on Vicky Pattison’s podcast last night, in an episode titled ‘The Secret To Causing Chaos’, Sam, 25, revealed that he was a fan of the show “back in the day” when he was in school, and got scouted for it via Facebook Messenger.

“I was having dinner with my mother and I received a message on Facebook saying ‘would you like to come for a meeting?’. I didn’t think it was for me, so I left it for a bit, and they messaged again, and I thought f*ck it, I’ll come for a meeting.”

Sam recounts how he believes he got scouted due to his girlfriend at the time being in the public eye, and how he was therefore always papped outside of clubs with her “looking battered.”

Being 18 when he started the show on 2017, Vicky said she believed that was “very young” to be on reality TV, to which Sam quickly stated, “I absolutely agree.”

“I was 18, I didn’t know my left and rights, I had no idea what was going on. I was out just getting battered and trying to navigate myself.”

Sam made headlines for his love affairs and party lifestyle on the show, being involved with Lottie Moss and Georgia Toffolo, before both of those relationships ended due to his cheating.

The star went on to say that luckily he didn’t receive that much online backlash when he first joined the show as he was just “so young.”

Sam left the show in 2018 for three years before returning for the 22nd series. And it seems he returned with a slightly different persona, as he states “Covid was amazing” for him.

“It allowed me to not go out and to focus on what I’m really passionate about.”

Made In Chelsea is set to return to our screens with a summer series Made In Chelsea: Mallorca and is introducing four new cast members, India Hovenden, Isabella Francis-Baum, Willow Day and Malek Amro.

The new series will be available to watch from the 22nd to the 26th August.