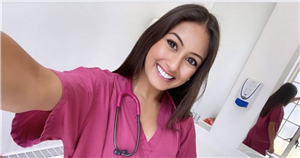 Priya Gopaldas has returned to work at a hospital for the first time after finding fame on Love Island over the summer.

The 23 year old, who is a fifth year medical student, took time off in a bid to find love on the hit ITV2 dating show, but was unfortunately unsuccessful in her quest.

Beautiful brunette Priya – who left the villa with Brett Stanilard after being voted the least compatible – has now taken to Instagram to share footage of herself in her scrubs as she got back to work on patients.

Addressing her 110,000 followers, she said: "Hey guys, so I am three hours into my first day back in the hospital and I'm in urology.

"So that is problems with the kidney, ureters, male reproductive organs, prostate, bladder, and I've clerked a couple of patients which involves taking their full history, examining them, recording in their notes and writing a care plan.

"So I've done that and it feels really good to be back. I'm so excited to learn more."

She also shared a photo of herself with a beaming smile, writing: "back to normality," alongside a white love heart emoji as she tagged her location.

Ahead of her time in the Love Island villa, Priya said of her time studying: "The goal is to be an orthopedic surgeon – that is muscles and bones. There aren't enough women in that area of surgery.

"I feel like I'd like to go head first into that area and be a representative for women who think orthopedic surgery is male dominated. More women need to be exposed to it and realise they can do it.

"I feel like this year in particular has been so intense because of Covid. Our studies were interrupted midway and we were all told if we wanted to we could help out during the pandemic so I was working in ICU for the whole of February.

"You would come back after every shift exhausted so there definitely wasn't any time for dating or relationships."

Upon leaving the villa, Priya revealed she had received £750 for her time on Love Island but donated it to NHS Charities Together.

Speaking exclusively to OK!, she said: "I just thought, with the year we've had, the NHS has given me so much, given everyone so much.

"So as a little gesture of my appreciation for the NHS and the people that work tirelessly for our health I thought I's just give them that because Love Island was such a positive experience for me."

Priya then revealed: "I didn't even realise I was getting a pay cheque from ITV. So because it was such a positive experience I thought just as a little token of my appreciation I'd give it as a donation."

To keep up to date with all of the Islanders outside of the villa, make sure to sign up to OK!'s daily celebrity newsletter.