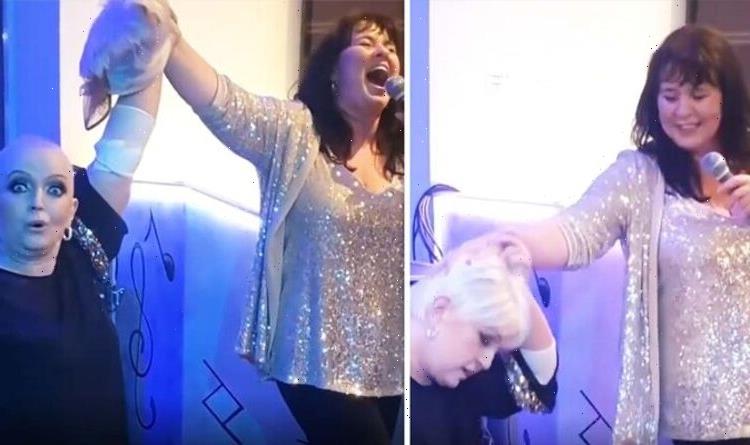 Loose Women panellist Coleen Nolan, 57, was the life and soul of the party when she celebrated her sister Denise’s 70th birthday with the rest of the Nolan clan. The I’m In The Mood For Dancing singer was seen belting out a tune on karaoke before she hilariously “snatched” Linda Nolan’s wig off the top of her head.

Coleen attended the bash in Blackpool on Friday and dazzled in a sequin camisole with matching jacket..

She paired the glitzy number with black trousers and sparkly gold heels and took to the stage to give a rendition of ABBA’s Thank You For The Music.

As she finished the song, Linda, 63, ran to the stage to add in some harmonies before gesturing to Coleen to place her hand on top of her head.

Coleen then hysterically lifted up Linda’s wig to reveal her bald head and immediately burst out laughing.

Linda also saw the funny side and shared the clip to her 39,000 Instagram followers.

She captioned the post: “So, Coleen really did ‘snatch wigs’ at Denise’s 70th party!”

Dozens of fans replied in the comments, including Karen who said: “It’s all about the humour! Love you sisters especially Linda…such a good sport! Hope you all had a fab night!”

Ben echoed: “Love you ladies #TeamNolan. Hope you all had a lovely time.”

While Meistapper wrote: “You both have a great sense of humour.”

Coleen took to her own Instagram to gush about the night and posted a snap of the sisters all together.

The Loose Women star stood at the end next to Maureen, 67, who posed next to Denise, then Anne, 71, and Linda.

It comes as both Linda and Anne are facing ongoing battles with cancer.

Linda was first diagnosed with breast cancer in 2005 and was put into remission after one year of treatment.

Her cancer sadly returned in 2017 and was classed as incurable. In 2020, she was told it had spread to her liver.

Linda previously revealed that she and Anne were re-diagnosed with breast cancer on the same day after the latter first battled the condition in 2000.

Thanks to treatment, Anne is in remission and currently cancer-free.

Linda recently said she was “determined” not to miss Denise’s birthday as well as her nephews’ upcoming weddings.

She told The Sun earlier this month: “Three of my nephews are getting married and Denise has her 70th coming up.

“My godson Danny, who is Maureen’s son, is getting married in Italy and that is my goal — to make sure I am there in August. I am going to be there for all of those things. They are milestones. I am determined.”